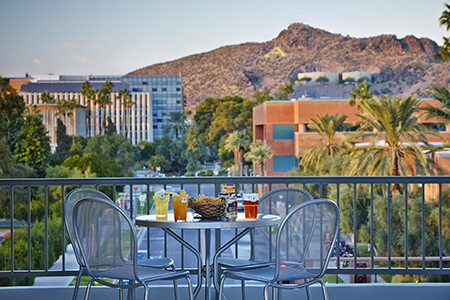 If the current temperatures aren’t yet summery enough for you, a jaunt to the desert is one way to bask in a blazing sun and 80-degree days. Tempe, Arizona practically guarantees that kind of weather and also offers plenty to engage the active visitor.

I recently stayed at Graduate Tempe, a new hotel across the street from Arizona State University. In the front lobby, one can tell the vibe is quite different than a cookie-cutter chain. Excerpts from Charles Darwin’s “The Origin of Species” adorn the front desk; an ant farm is implanted in a wall behind.

Boring room keys enjoy a new twist: they’re actually old student identification cards (mine was Ruben Navarro). In a similar vein, the word “Studying” hangs on doors as opposed to “Do Not Disturb” signs.

The idea of Graduate Hotels is designed to appeal primarily to parents visiting their children on college campuses. Backed by Adventurous Journeys Capital Partners, headquartered on West Randolph Street in Chicago, the brand is launching other similar properties in university towns, with Madison, Wis. scheduled to open this summer.

At the Tempe property, outstanding food is prepared at Tapacupbo and The Normal diner. At the former, sit down at a bar covered by 38,000 Mexican pesos for handmade tacos. At the latter, the Gringo Burrito (filled with white cheddar, spinach salsa verde and housemade chorizo) is sensational.

The Normal diner is anything but (the name’s roots go back to the 1885 founding of Arizona State, then called the Territorial Normal School at Tempe). A mural there incorporates photos from Southern Living, High Times and more magazines; a slew of eight-track tapes rest on another wall like a museum artifact for millenials. 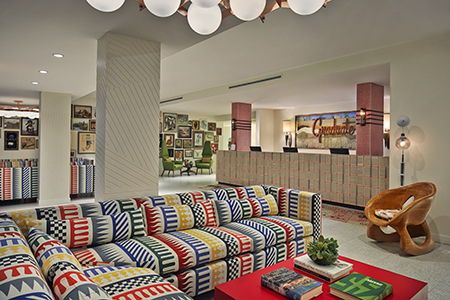 With a full belly, hop on one of the bikes that await outside and cross the street to join more than 50,000 students — the most in the United States—at the main campus of ASU. Students traverse the vast campus on bikes when they’re not on skateboards. Orange trees dot the scene, along with the first Starbucks truck at a college.  A science building houses one of the largest meteorite collections in the world, many of which can be touched. To comfort shivering students, the fireplace in the student union clicks on if the temperature drops below 70 degrees.

Just before returning to Graduate Tempe one will encounter Grady Gammage Memorial Auditorium (also known as ASU Gammage). Frank Lloyd Wright designed the structure, which is based on plans he had developed for an opera house in Baghdad that was never completed. According to Executive Director Colleen Jennings-Roggensack, Wright said “he would build a building with outstretched arms that says, ‘Welcome to Arizona.’ “

That he has. The flavor of the state is certainly inherent. More than two dozen shades of terra cotta (a brownish-orange color) grace the flowing building, which has no right angles and hosts a slew of Broadway-type shows each year. Perhaps the best balcony view of any 3,000-seat theatre exists because the upstairs is severely sloped, so much so that some theatergoers experience vertigo.

During spring training Chicago is a big feeder market for Tempe, thanks in part to the Cubs’ facility in nearby Mesa (the North Siders draw the most fans of any of the 15 Cactus League teams). A trolley in downtown Tempe will take fans to Sloan Park or to Tempe Diablo Stadium, home of the Los Angeles Angels of Anaheim. Though the games don’t count, watching prospects play in the sunshine is a welcome sight, and many spring-training games are sold out. 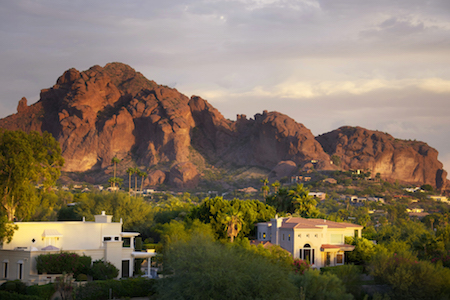 About a 15-minute drive from the hotel, the Desert Botanical Garden in Phoenix is a stunning spot featuring more than 50,000 plants. Winding paths transport visitors past tons of cactus (Director of Marketing John Sallot points out that the inside of cactus is wood, just like a tree). Its concert series allows visitors to enjoy music under the stars.

The area around Tempe is a hotbed of hiking. South Mountain Park and Preserve — the largest municipal park in the country at 16,000 acres— boasts more than 50 miles of trails. After the trek, the Four Peaks Brewery in Tempe is the place to grab a craft beer in a renovated brick warehouse. And more fun beckons back at Graduate Tempe, where the rooftop bar hosts bands (Imagine Dragons is expected to perform there this summer). Gaze out at the full moon and realize that the unpredictable weather of Chicago is, thankfully, far, far away.