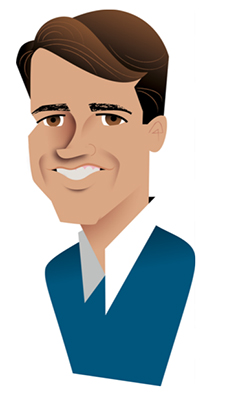 Having children changes you. Anyone who’s a parent knows this to be true, and it can be somewhat surprising to see what kind of change it creates in you. For Brooks Olbrys, becoming a dad transformed him from being a successful investment banker to something he never could have imagined: a children’s book author.

It definitely wasn’t a plan,” says Olbrys, author of a picture book and two chapter books about a character named Blue Ocean Bob, including the most recent, The Adventures of Blue Ocean Bob—A Challenging Job. Olbrys, who now lives in New York, was raised by a single mom, and he attended seven different public schools during his childhood. Despite the unpredictability of his youth, Olbrys was a hard worker and focused on success. “I was always looking at how I could better my life and get to the places I wanted to go,” he says.

One of his key influences at the time was Napoleon Hill, one of the earliest noted American authors writing personal-success literature. Olbrys read and studied some of his works, including The Law of Success. “I’ve always been a student of these ideas,” he says. He went on to graduate high school, attend Stanford University, go to law school and earn a graduate degree in international affairs. All of that translated into a successful career in investment banking.

And then he had a son. Olbrys spent many nights reading to his child, and he realized that many of the ideals he valued as a young child weren’t represented in any of the books he could find. He approached a mentor with the idea to produce children’s books that focus on the philosophies of achievement including, for example, confidence, responsibility, communication, gratitude, and success. “When I took it to him, I never thought I’d be the one to write the stories,” says Olbrys. But as it turns out, he was the best man for the job.

Olbrys self-published his first picture book for children ages 3-5 in 2011 about a young kid on an island with sea creature friends who learns the different principles of achievement. Writing and publishing a book was a learning process, he says—writing in rhyme without any training, working with an illustrator, and trying to understand business aspect of putting together a book. He then partnered with a publisher for his second book, this time an early chapter book targeted for children ages 6-9, but still about his main character Blue Ocean Bob. And just this year, he published his third book, the second in the early chapter book series. The final book in that series will be released in 2016.

My son influenced me,” Olbrys says. The now 11-year-old essentially became an advisor, providing feedback on illustrations and storylines, as did Olbrys’ wife. “It didn’t feel like work. It felt like part of our family life,” he says of the process, which is helpful since he still works full-time in investment banking and writes during his free time. “Because I had a passion for it, it didn’t feel like work,” he adds.

Olbrys’ goal with the books has always been the same. “The whole series’ overarching theme is how to develop positive thinking and a positive mental attitude. It’s about taking a positive approach rather than a negative one. The 15 principles in these three books are solid principles,” he continues. “If you can master these 15, you’re in good shape.”

Once the final book in the chapter book series is finished, Olbrys plans to see how he can expand the storyline beyond print books. He’d like to see Blue Ocean Bob as a character on a TV show, for example, and he’s experimenting with apps. For now, he’s working on getting the books into more schools and developing comprehensive teacher/parent guides. “My focus has always been to make it solid and lasting,” he says. He wants to share with as many children as possible the principles that were so important to his early success.