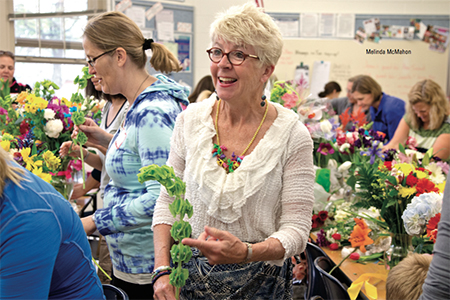 “This is bittersweet.” Those are the first words Madison School Principal Melinda McMahon says when I ask how the last few weeks are going at Madison School leading up to her retirement. “It’s hard,” she adds, watching the artwork come down from the hallways as it does every year, this time knowing she won’t be here in the fall when hundreds of little feet come trampling through the main doorway at the start of the school year. “It was the hardest decision I’ve ever made,” she says of her June 30 departure.

It was hard for a number of reasons. It’s hard to leave a staff of teachers and administrators so dedicated to their students and their craft. It’s hard to walk away from an elementary school and a district with parents who are so committed to their children and their education. It’s hard to hear “We’ll miss you next year” from the students who she has welcomed to the school every day during this school year and so many years prior. Madison has been, in so many ways, her home for 23 years, and she’s about to say goodbye for good.

McMahon doesn’t take the decision lightly, but she has a good reason for doing so. Two, actually: a 17-year-old daughter and 15-year-old son. “I’ve always worked,” she says. She started her career as a full-day kindergarten teacher in Ohio, and later taught 4th grade, reading courses and gifted education before joining the Hinsdale school district as a social studies curriculum director before becoming principal three years later. “This was the place to be,” she says. It was called a lighthouse district known for innovative thinking in its approach to teaching. McMahon talks about the superintendent at the time, Ron Simcox, who believed in quality curriculum development and developing teachers to excel in their roles.

That echoes much of what has become McMahon’s philosophy on education. “In my practice, I always try to think about what I would do if this were my own child. I ask, “What would be best for them to learn?” And I listen to them. I think about their perspectives, lives, and experiences,” she says. “Children want to be active. They want to be valued. They want to make their own decisions. They don’t’ want to be told what to do. They want variety and flexibility. Children become teachers, too.”

McMahon is proud of many of the programs and successes that have been built under her leadership, including a 5th grade send-off celebration assembly, an outdoor living classroom, monthly all-school meetings for staff and students, a morning broadcast put on by students and a safety patrol led by Madison’s oldest students. Her goal has been developing young students into leaders even at an early age by helping them realize how they can contribute to their school.

She has also been an early proponent of social and emotional learning. She started a “buddies” program that gained teacher support over the years, and now all teachers participate. Kindergartners have 3rd-grade buddies, 1st and 4th graders are paired, and 2nd and 5th graders are buddied together. Buddies meet weekly or on alternate weeks, and teachers design activities that extend learning opportunities to enhance the school and local community. Buddies read to each other, write poetry, sit together at assemblies, provide service time cleaning grounds, and write to senior citizens, youth, and veterans.

McMahon has certainly seen a lot of changes in education during her time at Madison. “There is a lot of questioning,” she says. “A lot of people are asking, ‘What should we be doing differently?’” She says there’s a lot of coverage and discussion in the media about whether or not today’s children are being adequately prepared for careers and college education, thus causing a lot of questioning. “Education is going through tremendous change—in our curriculum, staffing, and programs,” she says.

Some things have not changed, though, including the passion of teachers and students to become confident learners. Also, McMahon says the dedication and creativity of parents to help the school and their own children has not waned since day one. In fact, their commitment has only grown. “They have high expectations,” she adds. “They’re realistic, but they’re challenging. They believe in education, and they want to be involved.”

In addition to spending some much-deserved time with her children in her retirement, McMahon hopes to continue to support other administrators and contribute to the larger conversation happening locally and nationally about the future of education. “I need to do something,” she says. “I need to be busy.” After 23 years roaming the hallways as principal of Madison School, her days will certainly be much quieter, but it sounds like her voice will continue to be heard.