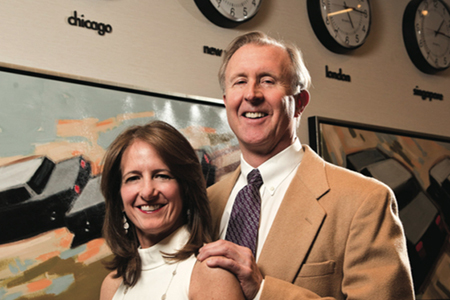 By 1972, Rita Hayworth, the leading lady and femme fatale of Hollywood’s noir thrillers was in a bad state.

Hayworth’s career had slowed to a virtual standstill, due, in part, to her erratic and seemingly drunken behavior on the sets of her movies. At 54 years old and semi-retired, she agreed to film The Wrath of God. But filming exposed her deteriorating mental state even further: she couldn’t remember her dialogue during scenes. Eventually, it got so bad that director Robert Mitchum had to painstakingly film her saying one line at a time.

In reality, Hayworth wasn’t forgetting lines because of alcohol. The pin-up model, dancer, and actress was suffering from the early onset of Alzheimer’s disease: and even more harmful, no one realized it.

Named after a German psychiatrist who identified the first case at the turn of the 20th century, Alzheimer’s was still barely understood by the time the Alzheimer’s Association was founded in 1980. By then, Hayworth was getting worse. In July of 1981, her health had to deteriorated to the point where a judge in Los Angeles Superior Court ruled that she be placed under the care of her daughter, Princess Yasmin Khan. Six years later, after her mother passed, Khan founded the Rita Hayworth Gala in her honor.

“One of the things that frustrated [Khan] was Rita would go onto the movie sets, and everybody thought she was an alcoholic because she couldn’t remember her lines,” says Jim Draddy, co-chair along with his wife, Susan (both pictured), of the 28th annual Chicago Rita Hayworth Gala. Adds Jim, “Khan wanted to bring awareness to this disease.”

Held on Saturday, May 9, at the Hilton Chicago, the gala is equal parts awareness and fundraising opportunity to eradicate a disease that to this day is still poorly understood by the medical community. Consider: Alzheimer’s disease is the sixth leading cause of death (killing more than prostate cancer and breast cancer combined), while deaths from Alzheimer’s increased 68 percent between 2000 and 2010. And it cannot be prevented, cured, or even slowed.

“It’s a disease unlike any other in that it is [also] really devastating to the entire family,” explains Susan. “Not only for the person who has the disease, but everyone around them.”

For the Draddy’s, Alzheimer’s is something they have had to endure as a family. Jim’s father was diagnosed with the disease, and Susan’s mother and father were as well.

Susan’s father always had some memory issues, but when he took a turn for the worse the family looked to her mother. “She was always the rock of the family,” notes Susan.

But at some point that switched, and her decline became very rapid. It was evident for the first time when Susan went shopping with her sister for a cousin’s wedding dress. They had gone to Bloomingdales but couldn’t find anything. Upon returning, Susan’s father asked how the shopping had gone. Her mother told him that she would go to Bloomingdales tomorrow to look for a dress, forgetting the day’s events.

It wouldn’t be a couple more years before they were actually diagnosed. “You watch a steady decline,” says Susan.

The Draddy’s are optimistic that this event, held annually on Mother’s Day weekend and attracting more than 900 guests, will prove fruitful, with funds from auctions and ticket prices going to support cutting-edge research.

Awareness for Alzheimer’s has also never been greater, something Princess Yasmin Khan is surely proud of.

Recently, its taken the form of Julianne Moore winning an Academy Award for her performance as a linguistics professor diagnosed with the disease in Still Alice. A documentary about the country legend, Glen Campbell: I’ll Be Me, and documentaries by HBO and PBS are also bringing this pernicious disease to light. And galas from Washington D.C. to Los Angeles are raising over $60 million to fight the disease. But more needs to be done.

“This is something really important to us,” says Susan. “I don’t want to be sitting here 10 years from now trying to raise funds. We want to be celebrating that we’ve made significant progress.”