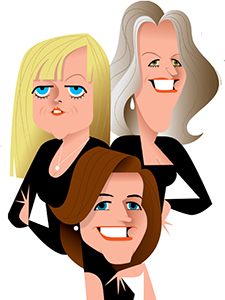 When I made a reservation for lunch for me and one cast member of the upcoming Community Revue Frozen Hinsdale performance, I should have known a table for two wouldn’t be enough. After all, the biannual revue, celebrating its 10th anniversary this year, is a collaborative, community theater production, and no single person can rightfully be considered the “star of the show.”

Instead, three women join me for a lively pranzo at Il Poggiolo on a brisk Tuesday at noon, a little more than five weeks out from opening night. As expected, Hinsdale residents and cast members Laura LaPlaca, Susan O’Byrne, and Teri Goudie are outgoing, gracious, and excited to talk about the show that equally skewers and celebrates the village they call home. Somewhat unexpected, however, is their calm and confidence. Where are the nerves? The anxiety? They’re about to take the stage in front of 260 friends and neighbors for four nights on two consecutive weekends at the Community House this month, but they show no signs of concern.

To be fair, Goudie insists that performing for people she might regularly cross paths with at the grocery story is brutal. “It’s one of the gutsiest things you can do,” says the former ABC News journalist and now communications consultant and executive coach. She trains CEOs and financial experts in communication and public speaking, but the Community Revue is what she says is nerve-wracking, though I get nothing but positive vibes from her and her friends—probably because they all have multiple shows under their proverbial belts.

“We put it all out there,” adds O’Byrne, a seasoned community theater performer who has a Ph.D. and once taught Shakespeare to college students. As we order our meals—a combination of chicken and spinach salads, kale salad with steak, and a caprese sandwich with soup—they remain tight-lipped about the revue’s featured subjects and songs this year. Renditions of songs from Disney’s Frozen will likely make an appearance (hence the name), but the show will feature a variety of songs of different genres and decades, including some all-time audience favorites. And no subject matter is safe. “If it’s been in the news, it’s in the show,” says O’Byrne. “We cover it all—from the soccer mom’s perspective to the village trustee’s perspective.”

I keep prying, and LaPlaca finally takes the bait—a little. She admits a few numbers will be dedicated to headlines surrounding the school board in recent months, though that’s little surprise. “I couldn’t write this stuff if I tried,” she says.

LaPlaca has been involved in the revue since its inception. She hesitates to call herself a founder, and prefers simply writer and original cast member, though my other tablemates defer to her about the show’s history as our plates arrive. LaPlaca is a lawyer by practice, but she’s been involved in village government and on the planning committee during her time in Hinsdale, giving her plenty of fodder for scriptwriting. When asked if the show has ever offended anyone, she says yes, and they’ve learned from those experiences. But she follows up, joking, “We try and offend everyone equally.”

“The show is a parody of our lifestyle,” LaPlaca adds. The revue’s four separate vignettes target overarching themes of competition and one-upmanship, but it’s all in good fun. “If you live in this town, you have to be able to laugh at yourself.

As the waiter circles and starts clearing empty plates, I nail down a few show details. Total cast members: about 25. All the credit should go to: Director Dave Heilmann, who O’Byrne calls “the most patient man in the universe.” Secret weapons: wildly talented male singers and unexpected cameos from well-known locals. And there’s one important point they continue to make: This is a fun theater performance, but it’s also a fundraiser. “The show is important because it gets people to visit the Community House,” says Goudie. “It opens their eyes and shows them a place where people gather and grow.” The last event two years ago raised $53,000, and early ticket sales indicate that number will grow.

The check comes as the castmates swap stories of their most memorable shows and favorite songs. As we grab our coats, the conversation pivots to the cast party on closing night, to which I find myself hoping for an invite.