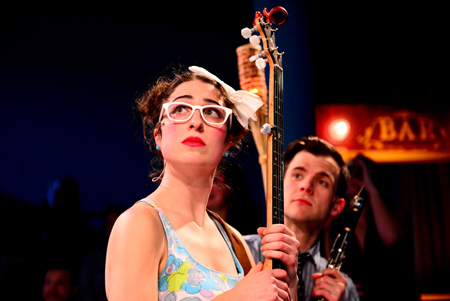 Its perkiness is enough to loosen up even the most hardened of holiday grumps.

Those with short attention spans will, also, appreciate this take. Boiling down the classic comic opera to one hour and twenty minutes (with a one minute intermission) allows for all the important plot information to be processed with special attention being paid to famous musical numbers such as “I Am The Very Model of a Modern Major-General” (inhabited with proud buffoonery by Matt Kahler) and “Poor Wandering Ones”. The comic zaniness which follows the young and honorable Frederick, after being released from his indentured pirate ship apprenticeship, is out in full force, as well. Upon falling in love with the previously unnoticed Mabel, Frederick is tricked by the Pirate King and Ruth, his lustful guardian, into believing he is still obliged to his former crew. Plot twists and surprise revelations soon plot the course to Frederick and Mabel’s anticipated marriage.

Esteemed director Sean Graney handles all of the script’s zany curveballs with the enthusiasm of a child on the playground. As dedicated to colorful performance art techniques as traditional theater, Graney creates a gloriously careening beast here, with the audience and the performers often melding into one unit, without ever losing control of his epic creation. Graney is invaluably assisted by Alison Siple’s inventive costuming, Erin Kilmurray’s pulsing choreography and the rest of the quicksilver behind the scenes crew.

As the proud Frederick, Doug Pawlik is charmingly goofy while Christine Stulik portrays both Mabel and Ruth with an accomplished zest. Kate Carson-Groner, Emily Casey and Dana Omer provide adorable back-up as Mabel’s sweetly singing sisters. They, as all of their co-stars, truly prove their worth as performers by playing all of their own instruments, as well.

Pirates of Penzance (along with versions of H.M.S. Pinafore and Mikado) runs through February 7 at the Den Theater Mainstage, 1329 N. Milwaukee, in Chicago. Tickets are $36-$50 and can be purchased by visiting the-hypocrites.com.