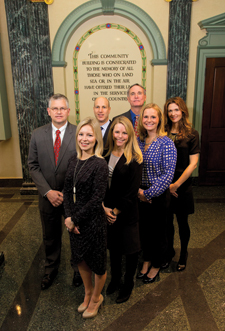 Masks come in all shapes and sizes. The physical ones are mostly worn for our amusement: to hide one’s identity or to assume a different guise. To cover our faces and to assume something else entirely. At the Hinsdale Junior Woman’s Club’s (HJWC) benefit on February 7, 2015, the eighth annual fundraiser—a masquerade at the JW Marriott in downtown Chicago—will draw hundreds of masked attendees.

But all proceeds will go to a different façade, and not the fun kind. Instead, the event is to benefit the emotionally- and mentally-burdened mask worn by parents and children alike when they are homeless.

Over 71,000—or 7.8 percent—of residents in DuPage County are homeless. And this issue inordinately affects the younger population; the average age of a homeless person in the county is eight years old.

“I think about that now every time I tuck my kids into bed,” says Megan Pack. One of three underwriting co-chairs with HJWC (and one of 250 active members), Megan was part of a team in charge of adding principal sponsors to the event.

Along with co-chairs Ruta Dudenas Brigden and Melissa Karczewski, the underwriting team called on HJWC supporters Dionne Miller and Leo Neidetcher to help enact a partnership with Hinsdale Bank & Trust/Wintrust Financial Corporation. It ended up being the perfect fit—with the bank pledging $20,000 to be the first principal sponsor.

And many of the bank’s management, it turns out, had experience volunteering with HJWC’s benefit organization, Bridge Communities.

Ever get in a car on the first weekend of November and drive past a group of pitched tents, boxes, and cars alongside each other and wonder what was going on? The temporary transient community is a part of Sleep Out Saturday, raising awareness for Bridge Communities. Nearly 2,000 DuPage County residents participated this year, sleeping outside to increase visibility and funding for the grassroots, non-profit organization committed to transforming the lives of homeless families in DuPage.

“Our primary mission and the heart of who we are is a community banking organization,” says David Larson of Wintrust, a current board member and mentor of families at Bridge Communities with his wife. “Very simply, what Bridge does—helping people in the community attain self-sufficiency from homelessness—fits very much with our mission.”

Hinsdale Bank & Trust is a subsidiary of Wintrust Financial Corporation, a financial services holding company based in Rosemont, with assets above $18 billon. The second largest Chicago-based bank, Wintrust, which just celebrated their 20th anniversary this year, combines retail banking, wealth management, small business lending, middle market lending, and real estate lending. But most importantly, they are invested in communities.

Members of HJWC say the community’s commitment to the masquerade has been tremendous. Still, they say, there are opportunities available for those interested in getting involved in some capacity, be it a sponsorship similar to Hinsdale Bank & Trust or a donation of an auction item.

One of 26 members on the masquerade’s benefit committee, auction co-chair Jill Sunderson says the majority of silent and live auction packages have come from local businesses and individuals. (One hundred percent of the donations and underwriting will go to Bridge Communities.) Jill notes that with the help of auction co-chairs Kerry Johnson and Kelly Kirchheimer, she has put together over 150 auction packages for the event. In speaking about community partnership, Kerry adds that the event’s silent auction will be incorporating a mobile bidding app—Auctions By Cellular—a local business with headquarters in Westmont.

“Anything people can contribute—be it personally or corporately—all of the proceeds will go to Bridge Communities,” says Zed Francis, of Hinsdale Bank & Trust and a former mentor at Bridge.

Zed—who became a champion of HJWC’s cause—has supported Bridge for over 15 years. As a former Bridge mentor, Zed tells the story of how he moved in mom and her four-year-old son into a new apartment in Westmont. The apartment, as is customary, was furnished with donated furniture.

“For a lot of cases it’s the first time that they’ve had something that they can call their own,” he says.

As he helped move them into their new bedroom, the four-year-old began looking around. “I said, ‘what are you looking for?’

“Well it turns out he was looking to blow it up, because he had only slept on  air mattresses his whole life.” It’s things like that, says Zed, which we take for granted. Bridge, in transitioning homeless people to self-sufficiency, gives people a way out of the same, on-going cycle of poverty. “It’s a powerful way to change a life.”

Or, in other words, it’s a way to help them take off their mask.

For more information on the gala, go to hjwc.ejoinme.org/Masquerade or call Allison Peters at 773-793-8796.