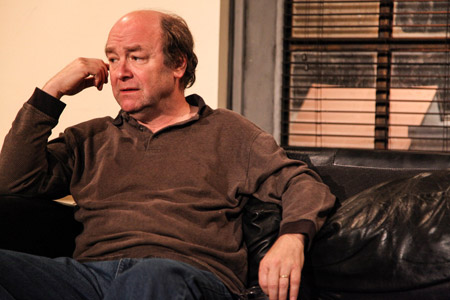 Newly set up as a therapist in a rundown office, a former priest named Ian is visited by a distraught widower named John. John is sure he is being haunted by the specter of his dead wife. But as John relates his tale of betrayal and emotional sorrow, it soon seems he is only being haunted by feelings of shame and remorse. But as Ian’s life begins to be influenced by John’s transgressions, it soon appears that something more mysterious than guilt may be in the offing here, as well.

Established as one of Ireland’s top playwrights, Conor McPherson creates with a ramshackle power. In particular, John’s monologue detailing the erosion of his marriage, which is the show’s focal point, is constructed with fascinating layers and true to life details. Knowingly, McPherson illuminates the secret lives we all lead, whether in action or thought, reveling in intense humanity all the way.

Director Jeff Christian imbues this Tony nominated piece with measured pacing and a distinct love for his performers. He is assisted by Allison Amidei’s accomplished costuming and the economical set designed by Ira Amyx and John Peplinski.

Meanwhile, Coburn Goss’ Ian is a portrait of calm poignancy. He is ably supported by Carolyn Kruse and Shane Kenyon in revealing supporting roles, as well. The show seemingly belongs to Brad Armacost’s John, though. A veteran performer, Armacost revels in all of his character’s nuances. Therefore, he takes us on a complete journey, filled with nearly every emotion in the book. It is a noteworthy performance in a show that perfectly bookends ITC’s previous piece, the very fine Lay Me Down Softly.