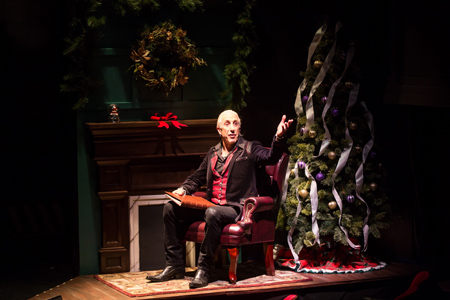 Not surprisingly, writing about the extremely fun Dee Snider’s Rock & Roll Christmas Tale falls into the latter category. Full of love for heavy rocking sounds and the joyful warmth of the holidays, Snider’s show pretty much ensures that everyone will be banging their heads, gleefully, as the cold and snow arrive and the festivities begin.

Snider’s tale follows the hard luck adventures of Däisy Cütter, a hopelessly out-of-date hair metal band. Despite their luxurious commitment to spandex and eyeliner, nobody is coming to their shows and they are set to be fired from their current gig. Inspired by the brain addled stories of Scratch (hysterically hoarse Bill McGough), the club’s janitor, the group desperately decides to sell their souls to Satan. Ever a sadistic jokester, though, the Dark Lord compels the band to, spontaneously, burst into heavy metal versions of Christmas tunes whenever they hit the stage. While the majority of the band revels in the newfound popularity that this device brings them, D.D. (played with luminous star power by Adam Michaels), the group’s bullheaded lead singer, is furious. Determined that the band should embrace metal music’s more gothic instincts, he, impetuously, sets out to destroy their one bid at superstardom. Can a certain red suited wonder eventually save the day?

Obviously inspired by his time in the cast of Rock of Ages, Snider creates a fairly simple, quick moving rock and roll tale, here. He even throws a couple of enjoyably silly plot twists into the mix, as well. Nicely, despite the less than serious atmosphere that he provides, Snider does imbue his major characters with a sense of heart, giving them extreme rooting value. Unfortunately, some of the supporting characters, including a couple of the band members, are given short shrift on the personality spectrum. This is especially worth mentioning because characters like Suzette (a compelling, sweetly voiced Keely Vasquez), a tough yet tender spirited club owner, do register so well.

Snider and director Adam John Hunter can’t be faulted for their love of pop driven spectacle, though. Masterminding multiple productions of Rock of Ages, Hunter shows he knows how to deliver the guitar screeching goods, here. Songs such as (Twisted Sister classic) “I Wanna Rock” and the funny, yet searing power ballad “You’re Just a Punk Who Can Sing” are given up with full bodied force. Wisely, Hunter, also, gives the fans what they want when it comes to Snider and his appearances. Functioning as the show’s lightly sarcastic narrator, Snider, also, charms as a wisecracking exorcist in the show’s most enjoyable sequence. Overall, Snider comes off as a likable and truly humble presence, drawing audiences even further into the show’s goofy radiance.

Nicely, Hunter and Snider, also surround themselves by a truly talented, musically diverse cast. All participants, including Michaels and Vasquez, play their own instruments and sportingly fill out Suzette Guilot-Snider’s tight and colorful costume pieces, which are almost characters unto themselves.

Dee Snider’s Rock & Roll Christmas Tale runs through January 4 at the Broadway Playhouse at Water Tower Place, 175 E. Chestnut, in Chicago. Tickets are $30-$90 and can be purchased by calling 800-775-2000 or by visiting broadwayinchicago.com