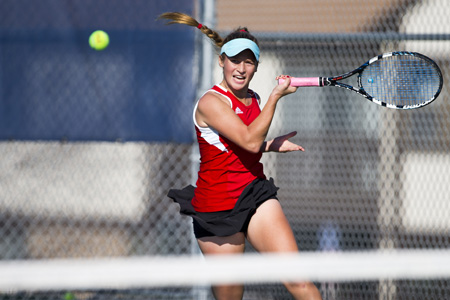 Hearing Hinsdale Central’s Bella Lorenzini during tennis matches is as engaging as watching her. “Yes, I am very loud,” Bella says. “I get more vocal (into matches). It motivates me in tight situations especially. It’s just my thing.”

So is success. On October 26, she claimed runner-up honors in singles for the second year in a row at the Illinois High School Association (IHSA) state tournament. Her efforts helped the Red Devils win a team title for a state-best 14th time.

In the October 29 United States Tennis Association 16-and-under age rankings, Bella is No. 1 in the Midwest Section and No. 10 nationally. Tennisrecruiting.net lists her as a 5-star recruit. The sophomore already is just the third Hinsdale Central singles player to reach the state finals twice. Her two-year record is 33-5.

“Bella’s definitely one of the greatest singles players in Hinsdale Central history, and that’s certainly saying something,” states Hinsdale Central coach Robin Kramer. “The way I know she’s playing well is when I hear (her),” she adds.

Bella entered the season with a new mentality and look for matches. She constantly wore a light blue Nike visor after it accompanied June victories in the Girls 16s singles and doubles with Chiara Lommer at the USTA Midwest Section Closed Outdoor Championships in Indianapolis. “It feels good. Now I just wear it all of the time,” she says.

Bella is the youngest of Colleen and Ron Lorenzini’s four children. Her father’s presence at matches remains a source of strength. She began tennis by hitting balls with him at the park and Hinsdale Racquet Club, where she trains with coach Jack Sharpe.

Bella became a regular at Hinsdale Central matches to watch siblings Caroline, 20, Ronnie, 18, and Michael, 17. “They were a great influence because they were all older and I looked up to them,” Bella says.

Her personality on the court, however, is all hers. Caroline plays with a “quiet strength.” Bella is vocal. Caroline won two IHSA state titles in doubles, but Bella wanted to play singles.

“I like singles better because I’m the only one doing it. I just like the individuality,” Bella says. “I’m very aggressive. I like to take control of the point, dictate play.”

“She’s just an amazing combination of being a phenomenal athlete—she’s got the quickness, the power—and also an intelligent player,” her coach says.

In the 2013 state singles final, Bella lost to Naperville Central’s Tiffany Chen 6-3, 7-6 (5). That came after a satisfying, three-set, 2 1/2-hour semifinal victory over Lyons Township’s Alex Chatt, the No. 1 seed.

In this year’s semifinals, she again defeated the No. 1 seed, Chen. In the final, Bella lost 4-6, 6-4, 6-3 to Carmel senior Brienne Minor, who did not play high school tennis in 2013. “Brie’s an unbelievable player. It was just a really competitive and long match. It could have gone either way,” Bella says.

“I matured basically (this season). If I focus too much on the last point that I miss, then it carries over to the next point,” she says. “If I lost a point, I’d let it go.” Bella hopes to become Hinsdale Central’s second state singles champion. CeCe Cahill won back-to-back titles in 1985-86.

She also wants to play NCAA Division I tennis like Caroline, a sophomore at Army. Ronnie plays club tennis at Indiana and Michael will play at Northwestern.

For now, Bella’s favorite visor will remain a constant companion in her tennis bag. “Yeah, I think so. (But) I should probably wash it,” she says.