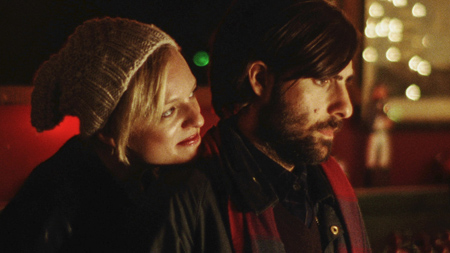 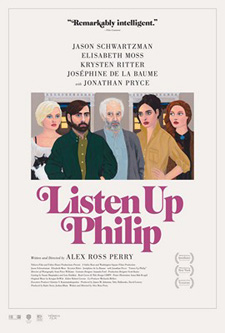 This Philip, as played by the repulsive Jason Schwartzman, is a pompous, short-fused, continually impatient, bad-tempered, self-absorbed jerk, which might explain why the pretentious narration (by Eric Bogosian) and arch tone of the film succeed in sounding, by the director’s own admission, inspired by Philip Roth’s writing style. Instead of a plot, Philip’s thoughts and actions are mere fractions of reality. He treats his roommate and girlfriend of two years, a photographer named Ashley (Elisabeth Moss, from Mad Men) with chauvinistic contempt. “I’m not a groupie or anything,” she says. “If you were,” he sneers, “you would probably have read both of my books.”

Feeling the city is rejecting him when it is really he who rejects himself, Philip arrogantly refuses to lift a finger to stoop so low as granting publicity interviews or promoting his second book in any way that might boost sales, and instead accepts an offer from Ike Zimmerman (Jonathan Pryce), a nasty recluse who is more cantankerous than he is, to spend the summer in the country to work on his third novel. Together they drink, seclude themselves from normal society in a cabin in the woods, and indulge in the kind of inflated intellectual babble you expect from published authors but never hear because nobody talks like that.

Just when you think you’ve heard enough, he leaves Ike’s to take a teaching job. In his absence, Ashley erases all thoughts of him and adopts a cat. The movie drags on. The narration is unnatural and phony. He returns for about an hour, for no reason, just so Ashley can say “You used to be so exciting—now you’re just pitiful.” The talk is minimal but races along too fast to assimilate, neither enlightening the viewer nor advancing the narrative. Philip is a brilliant writer, but a total disaster as a human being, despised by everyone he meets. A person like that is not, in my opinion, worth making a movie about, but almost every attempt to glorify a social pariah has the potential of being more successful than this one. (Sweet Smell of Success, anyone?)

Listen Up Philip is so devoid of the kind of logic that might help the viewer to understand these awful people. Everyone in it is so hateful there’s nobody to root for. Like most of the reports I’ve read about the real Philip Roth–including the painful memoir by his ex-wife, the enchanting Claire Bloom—he’s not only what the French call insortable, but a soul in exile as well. The Philip Mr. Schwartzman plays is so cruel, abrasive, sad and lonely that the people he damages cease to exist when he leaves the room. The filmmakers are also equally distanced from public acceptance because the movie shifts perspectives so often that there’s no way to grasp it and interest wanes fast. Listen up, guys. There’s not much commercial success on the horizon for a 108-minute lark that loses interest in half the time.