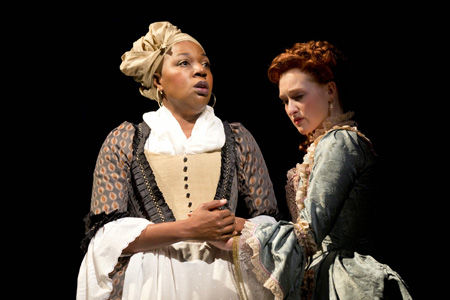 The show’s rich examinations of faith are offset by delicious soap opera plotlines and, ultimately, allow viewers to experience the sonic pleasures of some of New York theater’s finest up and coming talents.

In 18th century Britain, John Newton, a handsome and defiant son of a slave trader, bristles against everyone he comes in contact with. Angered over the premature death of his beloved mother, Newton rejects his cold hearted father and soon alienates his childhood sweetheart, Mary Catlett. While the sympathetic Catlett finds herself drawn to a group of abolitionists, Newton finds himself forced into labor upon a naval ship. After the ship sinks, Newton along with his faithful companion Thomas, becomes the captive of a vicious African princess. Will he be able to escape in time to save Mary from Robert Haweis, a corrupt government official, whom is determined to have her heart or destroy her in the process?

Based on the adventures of John Newton, whose ultimate conversion led to the writing of such hymns as the beloved titular classic, playwright and lyricist Christopher Smith (along with Arthur Giron) seemingly plays fast and loose with the basic facts of the lay minister’s life. This does create some magnificent drama. The moment when Newton allows Thomas to be sold back into slavery is devastating, as highlighted by the venerable Chuck Cooper’s attack on Smith’s anguished lyrics to “Nowhere Left to Run.” Plenty of fun tension is provided as Mary (the sharply compassionate Erin Mackey) finds herself wound tighter and tighter in the villainous Haweis’ (a truly slimy Stanley Bahorek) webs, as well. There are some obvious emotional denouements here and the shoehorned ending allows for no true examination into Newton’s creative songwriting process, resolving things on a slightly uneven note. But, overall, the delicious antics level out even the most deliriously religious aspects of the piece, making for an evening that even nonbelievers can enjoy.

Meanwhile, Broadway and musical veterans like Tom Hewitt and Laiona Michelle, whose powerful take on “Daybreak” is another show highlight, provide maximum entertainment value. It is Josh Young, Tony nominated for his take on Judas in the 2011 revival of Jesus Christ Superstar, who compels the most, though. His dexterous take on Newton proves he is on his way to Broadway stardom and Amazing Grace offers up a wonderful opportunity to watch him as he ascends.

Amazing Grace runs through November 2 at the Bank of American Theater, 18 W Monroe, in Chicago. Tickets are $33-$100 and can be purchased by calling 1-800-775-2000 or by visiting broadwayinchicago.com.