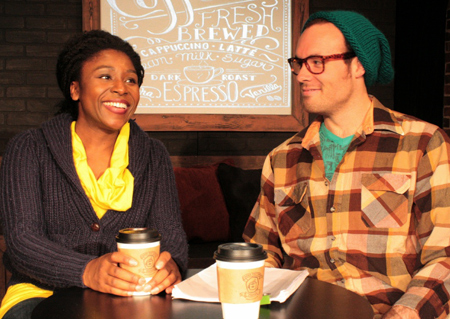 With this notion in mind, Pride Films & Plays’ Chicago premiere of Jeff Talbott’s The Submission explores the all-too-human reality of prejudice with humor and eye-opening depth.

After crafting a revolutionary play about the urban black experience, Danny is afraid that, as a gay white man, his work will be ignored. Therefore, he submits his piece to a prestigious festival using the moniker of a young black woman. Panicking, after his play is accepted, Danny hires Emilie, an actress he has admired, to assume the part of the imaginary playwright. The precarious situation turns even more volatile as the frazzled Danny proves that he has one more closet to leap out of – that of subtle racism. Thus, as Emilie bristles against Danny’s perceptions, he eventually begins to unravel under the pressure of the grand deception that he is responsible for concocting.

Wisely, by using a slightly neurotic but very likeable protagonist, Talbott is able to create maximum reliability, here. We can see ourselves in Danny and Talbott’s natural talent with situational comedy allows for the entire process to go down, easily, as well. What strikes the most, perhaps, is thought that one minority cannot fully comprehend and comment on another’s circumstances. This is the notion that, ultimately, divides (and nearly destroys) Talbott’s characters.

Taking a graceful swing at this award winning piece, director Jude Hansen delivers with subtle force, here. His detailed work with the passionate cast helps makes this one of the most powerful newer works presented this season.

As Danny, Nicholas Bailey connects with a charming sense of energy mixed with a running razor’s edge. His final moments onstage are unimaginably striking. As Emilie, Ginneh Thomas is both forceful and compassionate, a warrior among the ruins. Meanwhile, as the duo’s respective partners, Edward Fraim and Adam Pasen deliver performances full of funny asides and heartwarming dismay.

The Submission runs through November 25th at the (downstairs) Apollo Studio Theater, 2540 N. Lincoln, in Chicago. Tickets are $25 and can be purchased by calling 773-935-6100 or by visiting pridefilmsandplays.com.