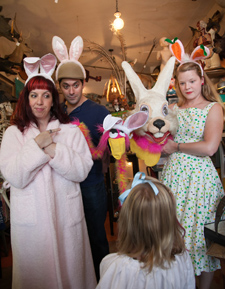 Up Ended Productions’ Alice, a performance art inspired adaptation of Lewis Carroll’s famous tale, leads participants throughout various establishments in this historic Chicago neighborhood. Bizarrely fun, this event also works as a tour of local sites, with watering holes, pet shops, and museums among the many stops along the way.

Groups, which leave in 15 minute intervals from the starting point, are taken by a guide rabbit throughout the hour and a half adventure. With the entire procession acting as the character of Alice, every vignette here is a mystery. The result is that one feels the confusion, joy, uneasiness, and delight of one of literature’s favored heroines.

Creator Noelle Krimm works with an industrious sense of invention and an odd love for Carroll’s creation. Some of the segments can be puzzling and while some rely on monologue heavy erudition, others are sparklingly creative. ShowParty! bring a wonderful sense of fun to Alice’s encounter with the Queen while Striding Lion Performance Group beguiles with a bizarre introduction of song and dance. The Neo-Futurists also contribute a hysterical take on Alice’s encounter with the Dodos. But entirely successful or not, this is definitely a one-of-a-kind presentation and a lovingly collaborative effort between the artists and the represented independent businesses.

Meanwhile, Friday nights in the neighborhood are being dominated by a mystical force of another kind. New American Folk Theatre is presenting Witches Among Us, a semi-serious musical. Providing the perfect atmosphere for the fall season, this is the story of a group of witches threatened by exposure and jail time by a corrupt police force in the ’60s. Thus, it compels with nice nods to the Red Scare and the nation’s (still present) homophobia.

Despite some stale queer humor, Rick Karlin’s script is full of exuberantly fun characters while Scott Free’s score combines elements of Sondheim and the Jazz Age. Headlined by the character of Serena, the beguiling proprietress of an underground club, this show is also benefited by Anthony Whitaker’s inventive direction and its location, a real life bar, The Call (1547 W. Bryn Mawr). Here, though, it is the cast that rules. Caitlin Jackson, a supporting player in many productions, is given a chance to shine with full bodied power as Serena. She truly is a magnetic presence. Meanwhile, Sarah Blevins charms as an absent-minded colleague of Serena’s. The best acting, though, is provided by the fine Chris Selefski. As a swaggering NYC cop, Selefski finds a true naturalness to all the expected stereotypes, and as his character begins to question his sexuality, he wins your heart, as well.