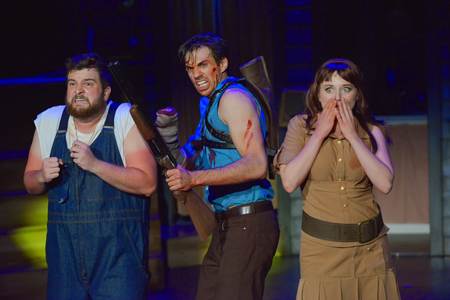 Playwright and lyricist George Reinblatt follows the original film series, which includes two ramshackle sequels, closely with his plot. Blue collar Ash, his girlfriend, sister and their friends break into a cabin in the woods for a weekend retreat. After reciting from a flesh covered Book of the Dead, the friends soon become possessed by evil spirits. As Ash has to imprison and ultimately behead his companions, a sexy scholar named Annie rushes to the cabin. Will Annie and Ash be able to banish the evil spirits to another plane before they take over the world?

While definitely playing homage to the films, Reinblatt also luxuriates in their ridiculousness. He doesn’t create sophisticated camp here, but a very silly and truly enjoyable low brow spectacle. Its frat boy humor presented with a delicious enthusiasm and some honest talent. In particular, his songs have moments of idiotic genius. Every repressed soul can appreciate the dynamics of a number like “Look Who’s Evil Now” while Annie’s lament “All of the Men in My Life Keep Getting Killed By Candarian Demons” is nicely hysterical. As with all parodies, though, this production is going to be appreciated the most by horror lovers and true fans of the films. Casual appreciators may not be able to get a grasp on the show’s very valid charms.

All, though, should appreciate the stage magic that is achieved on what seems to be a modest budget. In particular, the FX props by Scott Patterson and Marina Snider definitely hold some head flinging surprises. Meanwhile, the movable pieces of Lindsay Anne Black’s set establish some amusing moments, as well. Bringing it all together, director Christopher Bond relishes the slapstick notions of the script while simultaneously helping his talented cast find layers in every ridiculous beat.

As Ash, David Sajewich explores delicious currents of frustration and heroicness. Andrew Di Rosa’s everyman Jake connects with high heart, as well. In particular, though, this show is stolen by the women. Demi Zaino’s Cheryl is a zany delight. Meanwhile, the incredibly skilled Callie Johnson brings depth and star power to Shelly, a stereotypical terror bimbo, and to the clipped and self-important Annie. She is a talent to look out for.

Evil Dead –The Musical runs through October 12 at the Broadway Playhouse at Water Tower Place, 175 E. Chestnut, in Chicago. Tickets are $30-$70 (with additional seating in The Splatter Zone) and can be purchased by calling 800-775-2000 or by visiting broadwayinchicago.com.