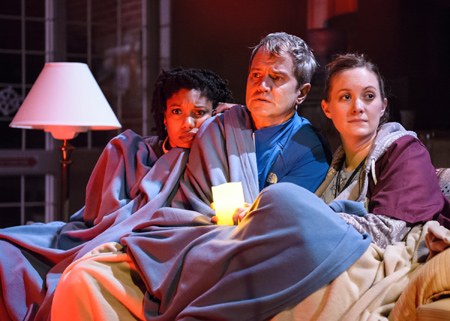 As a tiny retirement village prepares to close its doors forever, the remaining residents and staff find themselves immersed in circumstances of life and death. Trapped in by a sudden winter storm, they discover that one of the most addled patients, a brilliant musical scholar named Gerald, has wandered off into the drifts. Unable to help him, they are forced to look within and finally settle the score on some long buried personal truths. But a surprising revelation from Gerald’s determined spouse Etta may permanently alter everyone’s futures, for better or worse.

Recently named a 2014 MacArthur fellow, Hunter slowly reveals the histories of his characters in Rest. While Etta seems to have her hands full with Gerald’s swift mental erosion, all of the players, eventually, reveal their hard won quirks, making for a dramatic Night of the Living Dead style piece. Here, though, the zombies are emotional ones and the snowed in participants have no choice but to confront them, head on. Death, birth and the gory in-between are all explored by Hunter with complexity. Several of his scenarios do ring with more theatricality than reality, but overall, this is a touching story of a group of people at life’s crossroads.

Notably, director Joanie Schultz urges subtle and truthful performances out of her fine, accomplished cast. They are this production’s primary asset. Of course, Chelsea Warren’s realistic set, including a seriously malfunctioning automatic doorway, deserves plenty of praise, as well.

As Etta and Gerald, Chicago theater mainstays Mary Ann Thebus and William J. Norris create portraits of flinty virtue. They are equaled by the rest of the ensemble. Ernest Perry Jr. imbues his seasoned Tom with luxurious stretches of humor while McKenzie Chinn and Amanda Drinkall, as concerned attendants, revel in liquid emotionality. As relative newcomers to the facility, Matt Farabee and Steve Key supply their characters with grounded humanity even when their nervous dispositions begin to overcome them.