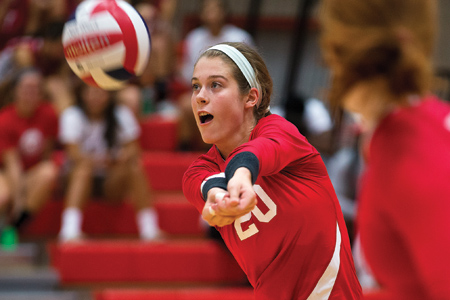 Hinsdale Central senior Lauren Fuller has always been a standout in her class for obvious reasons.

“Every (school) picture I was right in the middle, always the tallest,” says the 6-foot-3 outside hitter and four-year varsity team member for the Red Devils’ volleyball team. “I like being tall because it helps me. Sports-wise, it’s great. You can’t teach height. That’s what every coach says.”

Lauren, who got her stature from her 6-foot-7 father Scott, has literally taken her volleyball game to new heights—since first trying the sport as a Clarendon Hills Middle School eighth-grader a year after moving to the area from Pasadena, California. She has landed a scholarship to play at the University of San Diego, the preseason 14th-ranked team in NCAA Division I that finished 26-4 and reached the Sweet 16 last season. She picked the Toreros over Long Beach State after only looking at California colleges.

“Being a DI school, that was very important that I could continue my career at a high level,” says Lauren, who scored a 27 on her ACT and plans to study accounting or business. “The coaching staff there is top notch. I grew up [in California], and I always wanted to go back.”

Volleyball didn’t necessarily come easily for Lauren, even with her height advantage. She switched to the sport after focusing on basketball for nine years, while she also competed in soccer, swimming, and softball.

“The first day playing volleyball, that was definitely a change from basketball,” Lauren remembers. “I was in basketball mode. I was ready for contact, ready to get physical. Volleyball was so different because there was a net dividing people so I couldn’t box out someone. My first year playing volleyball was pretty rough. I really wasn’t the best player because I was still learning.”

Her game improved after her middle school coach suggested that she play club volleyball. She earned a spot on the highly regarded Sports Performance club in Aurora.

Sports Performance’s year-round training program featured three-hour practice sessions followed by a one-hour weight and conditioning session three times per week that required Lauren to focus solely on her new sport. After her first season there, Lauren made the switch from a middle hitter to an outside hitter.

“Playing at Sports Performance has been one of the greatest opportunities ever,” Lauren says. “Over the years, especially for Sports Performance training, you get so much better every day in that gym. The coaching staff pushes you. They want a certain athlete, one that is very determined and is very dedicated to the sport. You have to give up a lot of your time, a lot of your social life, to play there.”

Lauren credits Sports Performance coach Erik Vogt for not only “coaching me to get a scholarship, but in other aspects of life,” especially putting the team first.

“He molded me to push myself to be the best student, person and athlete that I can be,” she says.

“Freshman year I didn’t play [much at Hinsdale Central], but it was a great experience because I was playing with Ally. She’s a great hitter, great volleyball player, great person,” Lauren says. “So being on a team with her definitely taught me a lot.”

Now Lauren is hoping that she can be a role model and leader for Hinsdale Central in its quest to make this a special season. She helped make an immediate impact by earning all-tournament honors for the runner-up Red Devils at the Benet Tournament and receiving Player of the Week honors from the American Volleyball Coaches Association and MaxPreps last month.

“We have eight seniors this year and we just want to go as far as we can, end with a bang, leave a good legacy,” Lauren says. “I just love the sport so much. The team aspect of volleyball is great because you make friends that will last for a long time.”