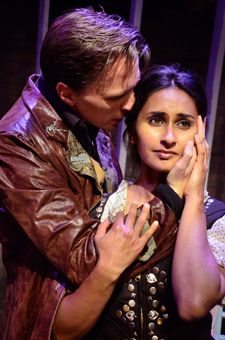 Anderson played Juliet like a dirty tomboy who eventually, as her love for Romeo blossomed, grew into sophisticated womanhood. It was a revolutionary take on the role. Although this scrappy energy is missing from the feisty title character in Lifeline Theatre’s current take on Jane Eyre, this production’s fine regality mixed with quirky steam punk dynamics, ultimately, makes for an interesting evening of theater.

The often adapted Charlotte Brontë classic concerns the adventures of the orphaned Jane Eyre (a quietly noble Anu Bhatt) as she finds love with a mysterious nobleman. After years of indentured living at a maniacally religious institution, Eyre is hired to be the governess of the distinguished Edward Rochester’s French ward, the exuberant Adele. At first, Jane finds Rochester (quirkily passionate John Henry Roberts) to be blustering and remote. Yet their strange attraction grows into a loving romance. But, just as Jane and Rochester overcome the odds and determine to marry, Rochester’s deadly secret is revealed. Will painful trials and luxuriant self-righteousness block Jane’s path to lifelong happiness?

Concentrating on Jane’s life, post-childhood, Christina Calvit’s adaptation makes the most of the story’s gothic atmosphere. Calvit’s interesting take on the ghosts of Jane’s past backfires a bit, though. While fascinating to watch, these literal phantoms, particularly the youthful Helen (Maya Lou Hlava, relishing the chance to be spooky), aren’t given enough back story. Therefore, people unfamiliar with the novel or multiple movie versions (including the 1943 version which features young Elizabeth Taylor’s bewitching take on Helen) may be confused as to why these characters have such an influence over Jane.

Director Dorothy Milne does delight the senses with some inventive stage pictures. A fire in Rochester’s bedroom, in particular, is a memorable amalgamation of simple props and Kevin D. Gawley’s excellent lighting techniques. Milne also has a fine sense of the literary. If the characters here don’t especially explode with life, they definitely feel as if they have popped out of the pages of a particularly fine book.