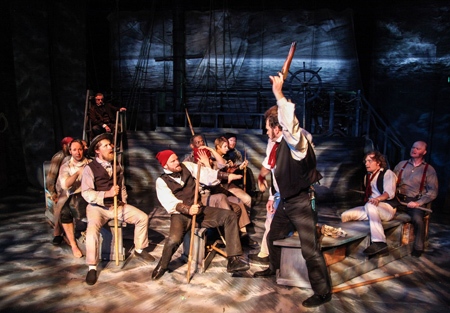 The charitable Captain Pollard (a robust Brad Woodard) sets sail for a three-year journey, hunting sperm whales for their oil, on November 20, 1820. His crew, comprised of veteran seafarers and impulsive newcomers, soon find themselves bristling against the harsh authority of Owen Chase (the pin-sharp Joseph Wiens), the First Mate. But Chase’s cracking whip soon seems like a mild punishment after an enraged whale decimates the hearty adventurers’ ship. Set adrift in lifeboats, the men soon find themselves separated from each other. Losing their lives to thirst and hunger, the desperate group eventually resorts to thievery, cannibalism, and self-sacrifice in order to survive.

Playwright and boatbuilder Joe Forbrich, who was intrigued upon hearing the tale while working as an actor at Martha’s Vineyard, manages to sprinkle his own love of the sea among his sixteen finely etched characters. While never straying from the story’s harshness, he interjects wonder and longing into every beating pore of this adventure. Ultimately a reflection on the twisted fates that guide us, while also incorporating a healthy knowledge of ecological circumstances, Forbich’s work, first performed in June of this year, is one of true power and beauty.

Along with Pollard and Wiens, the cast commits fully to the process. Of special note, Angie Shriner, Drew Schad and Antonio Zhiurinskas bond capably as younger members of the crew. Zach Bloomfield and Darren Jones, meanwhile, bring heartfelt essence to members of the older tribe.