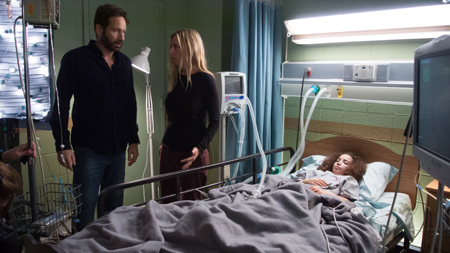 And when I talk about movies that inspire, inform and elevate us to a higher level of decency and pride than the usual junk, I am talking about films such as Louder Than Words, a well-made, beautifully acted, and sensitively written work about how the Fareris rose from the ashes of tragedy to build the Maria Ferari Children’s Hospital in Westchester. It’s a feel-good film with an infectious sense of fun and inspiration that brings out the best in people instead of catering to their lowest instincts. 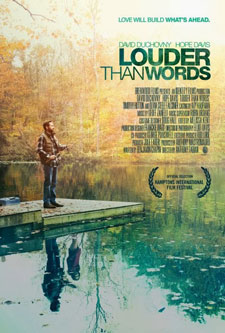 The Feraris were hardly a pastiche of Father Knows Best when their youngest daughter died suddenly at 13, but they were as happy and well-adjusted an American family unit as any sitcom could emulate. John Ferari (David Duchovny) was a successful developer whose wife Brenda (played by the marvelous Hope Davis) decorated the houses he built to appeal to an eager real-estate market. They had four children—college-age triplets Julie, Michael and Stephanie, and the youngest daughter Maria, a bright, alive and lovable muse who saw her role as a combination shrink, social planner, and arbiter of peace and family unity. Suddenly she came down with a rare form of rabies carried by bats. The odds of contracting this one are 160 million to one, which is why everyone thought it was unusual enough to make a movie about it. They were right. It’s an exceptional movie, and a noble effort to tell a sad, curious story. It’s not flawless, but that comes later.

The focus here takes the Ferari family from jubilation to despair as everyone grieves for their loss in a different way. Dad neglects his other children’s problems and ignores his wife. The parents avoid intimacy and grow apart. Daughter Steph (Adelaide Kane) drops out of college and leaves home for a nomadic life in the Pacific Northwest that brings her nothing but misery. Son Michael (Ben Rosenfield) gets his back tattooed in an act of defiance against his all-American upraising while he flunks out of school. Julie (Morgan Griffin), the first-born of the triplets, struggles in vain to guide them all. Mom suffers silently, valiantly bearing the futile burden of trying to keep up appearances while pretending life goes on. The father, a man who always believed action was louder than words, said the least in life but is now affected the most by death. Bravery is leavened with occasional violent outbursts of the rage they’re all hiding inside. Then, to everyone’s amazement, he hires someone to plan and construct a children’s hospital in his daughter’s memory. The project gives the family a reason to jump-start their dwindling interest in life, but to John’s amazement it meets with disapproval and financial resistance. Pediatrics, the film tells us, is at the bottom of the food chain. The third half of the movie chronicles the ways they set about to make their dream come true by fund-raising $30-million on their own, how they won over the community and the New York state government for financial aid, and how they made their dream miraculously come true by regaining the important values in life they thought they had lost through love and determination. Opened in 2004, the Maria Ferari Children’s Hospital has today become an acute-care facility that treats more than 20,000 children each year. The movie about it is mercifully more a document of survival than a documentary.

If I have one reservation it’s the structure. Louder Than Words has been directed with flair and sensitivity by Anthony Fabian, intelligently written by Benjamin Chapin and beautifully photographed by Elliot Davis, but so many facts are compiled in the well-researched screenplay that to get them all in, the film seems awkwardly edited in a series of vignettes framed as flashbacks, diary entries and snippets of memory that play leap frog with the narrative. The movie has to keep bringing the deceased Maria in and out of the story. She is, after all, the offscreen narrator. But sometimes the distraction is jolting. Never mind. This is a small caveat compared with the substance, force and importance computed by the film’s values, well served by an exemplary cast. It’s good to see David Duchovny, freed at last from the restraints of second-rate series bondage, emerge from Californication to give his most sensitive performance in years. Hope Davis is a marvel of small insights that lend character definition to her role as family matriarch. And there is strength and excellence in the supporting performances by Timothy Hutton, Margaret Ladd, Craig Bierko, and Victoria Tennant.   Louder Than Words is a life-affirming movie they can all be proud of—a triumph of hope over cynicism, strength over despair, and lemonade over lemons.