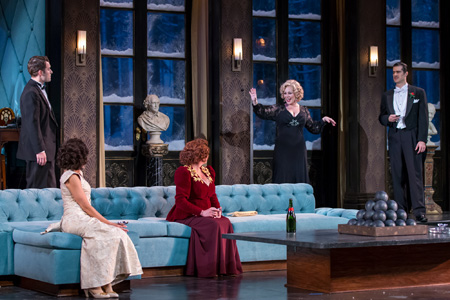 But the true enjoyment derived from this murder mystery-farce is in the subtly nuanced performances of the piece’s ultra-talented cast. In particular, Derek Hasenstab perfects the deductive mannerisms of William Gillette, a Sherlock Holmes enthusiast, who is now determined to solve a real life crime. Rob Riddle, meanwhile, supplies greasy charm to his two-bit actor and playboy, Simon Bright. The show, though, is almost stolen by Angela Ingersoll’s spidery, seductive take on the destructive Daria Chase and by Wendy Robie’s magnificent spin on a local police official. Her Inspector Goring is a remarkable creation, nimbly silly and calmly authoritative.

Multiple Jeff Award winning actress Alene Robertson, also, supplies some clever seasoning to her role of the protective, eccentric Martha Gillette, here. Famed for her creation of the role of Commissioner Doyle in Off Broadway favorite Annie Warbucks, the kind and happy Robertson recently took a moment to speak with us about The Game’s Afoot and her many artistic journeys. 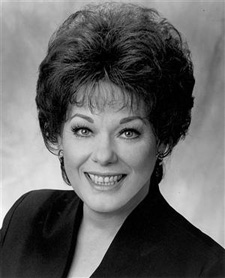 Hinsdale Living: You’re acclaimed for your work in musicals. Is The Game’s Afoot offering you different things to do as a performer?

Alene Robertson: Yes. First of all, this is the first play I’ve done at Drury Lane. I’ve done plenty of musicals here, but this is a murder mystery-comedy. So, there is a combination of the realism of the part and then there is some quirkiness at play with the character, as well. I don’t know if it is radically different from other things that I have done, but it is definitely something for me to think about.

This is the Chicago premiere, correct?

Alene: Yes it is! I think they first produced it in 2011 in Cleveland. It won the Best Mystery Play of 2012. So, it’s pretty, pretty fresh. It’s always a challenge with a new piece. You have to get the new character into your bones. It always takes a little while. You don’t feel the flow of the arc of the play itself or the character yet.

Your rehearsal processes at Drury Lane are fairly quick, as well, correct?

Alene: Yes. We have 12 days of rehearsal up in our rehearsal room. Then we move down the stairs to the theatre for the tech procedures. That takes about 4 days. It is very quick. Most of the musicals in town, actually, are ‘put ‘em quick’. It’s difficult. But you have a subscription season and those people know what the dates are and there is no futzing around with that.

This is a new role for you. Do you have favorites among the many famous characters that you’ve tackled?

Alene: I love Hello, Dolly. I love Gypsy. I love Sweeney Todd. I truly do love them. (Laughs) But, I’ve done so many productions of Annie. So, I’m quite fond of that role. I love Miss Hannigan! I, also, really like the character in Annie Warbucks, Commissioner Doyle. I created the role, so I was very involved with the process. I now know the composers and the writers very well. They are a big part of my life. (Laughs) So, there’s 30 years of that!

It must be an amazing process to actually create a role in a well known musical.

Alene: Yes! It’s very interesting. That was my first experience with watching something that got changed so often. It opened at the Marriott as the world premiere. Then it came to Drury Lane. There were lots of changes when we did it here. Then it went on a pre-New York tour. Then it went to New York, Off Broadway. Every day, there were major changes. You left rehearsal. You went home. You usually had your book in front of you while eating and then you went to sleep. The next morning you went in and there were more changes and you’d work them. It was a very interesting process and very stressful at times. But I learned a lot.

Are there any roles that you’d like to conquer that you haven’t yet?

Alene: Actually, I love to repeat things that I’ve enjoyed doing. (Laughing) Although, I would really, really love someone to write a play with me in mind.

Well, now, we’ve thrown that out there!

Alene: (Laughs) I would love that. During Annie Warbucks, the playwright told me, one day, that he had a few new inserts for me. I went okay and began to look at them. He said, “Yeah, now I know your rhythms and the way you speak”. That was so thrilling to me. He knew me and could write lines that would fit my personality. That made me so excited! Another time, Charles Strouse was changing some lyrics for one of the songs I did in Annie Warbucks. I just happened to throw out a word and he went, “Perfect!” So, it’s in the song now. It’s so exciting when something happens with someone like. (Laughs, heartily) So, now when I hear the music I get to go, “I wrote that line!”

That’s a great story! Is there anything, in particular, that you are most excited about with The Game’s Afoot?

Alene: I always enjoy our director, Bill Osetek. He’s probably one of the funniest men I know. It’s enjoyable to listen to him talk about a scene or something you’ve done. He’s quite brilliant. The play, itself, is very funny. You don’t realize how funny it is until you are up there working it. So, I am very excited about this play. The set will be a real surprise to everybody. The costumes are gorgeous. They only rented a few for an opening scene. Everything else was made here. The wigs are made here. There are a lot of fun surprises. I think everyone is really going to enjoy this one.