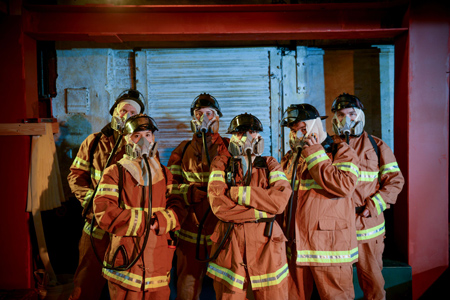 At his home one evening, Biedermann, a loosely respectable businessman, is visited by a homeless circus employee, Schmitz. Refusing, at first, to see Schmitz, Biedermann eventually allows him into his office, in the name of public decorum. Soon, despite a rash of mysterious fires, Biedermann gives Schmitz and his accomplice Eisenring, a former waiter, berth in his attic. As cans of petroleum and explosive devises fill up his home, Biedermann still refuses to believe that the two are the suspected arsonists. At a strangely celebratory dinner celebration, though, things come to a head. As Biedermann’s nervous wife, Babette, slowly loses her composure, the seemingly kindly duo’s true motives are revealed.

Definitely flecked with the bizarre shades of Eugene Ionesco and Harold Pinter, Frisch’s allegorical piece premiered as a German radio play in 1951. Its success allowed him to morph it into a stage play and television piece in 1958, with the first English translation appearing in 1964. Alistair Beaton’s maniacally potent version, utilized here, was first performed in 2007. Focusing on Beidermann’s corrupt ways, Beaton’s version allows you to heavily sympathize with Schmitz and Eisenring. Thus, the piece’s denouement, featuring a huge connection to the rise of the Nazi party, is potent and dramatically surprising.

Special notice, though, must be paid to Scott Danielson’s hilariously manipulative Schmitz, Sarah Goeden’s tremulously emotive Babette and Rebecca Wolfe’s saucily defiant Anna. Their skills truly help make The Arsonists one of the must-see pieces of the fall season.

The Arsonists runs through September 27 at Strawdog Theatre, 3829 N. Broadway, in Chicago. Tickets are $28 and can be purchased by calling 866-811-4111 or by visiting strawdog.org.