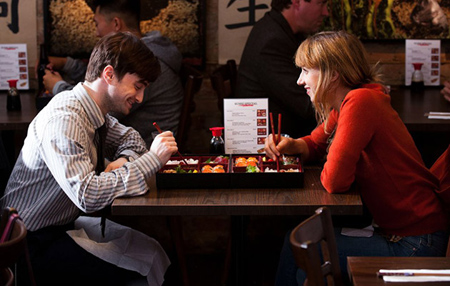 What If is his first attempt at romantic comedy and despite his diminutive size and struggle with a phony screenplay that never remotely resembles the way real people talk, he comes off as likeable and charming. Nothing to line up for or write home about, but it’s a pleasant time-passer, not a regrettable time-waster. 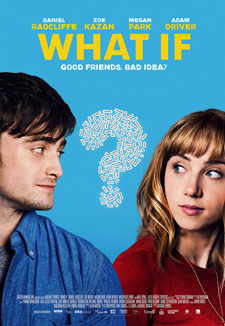 The versatile star, fresh from his critical success on Broadway in the grim Irish play The Cripple of Innishmaan, shows a lighter side as Wallace, a Toronto medical school dropout with a sad history of relationship failures. When he meets a girl named Chantry (Zoe Kazan) at a party where they discover a mutual interest in refrigerator graffiti, he decides to take it slow. Since she has a boyfriend already named Ben (Rafe Spall), he wisely decides it might be better if they just remained friends. The next time they meet, outside a cinema showing The Princess Bride, he gets more philosophical: “Love is an all-purpose excuse for hurting people.” Their taste in food is as dismal as their taste in movies. “Elvis died with forty pounds of undigested feces in his intestine,” offers Wallace, while wolfing down a favorite sandwich recipe called Fool’s Gold—a loaf of Italian white bread baked in a whole stick of butter, then scooped out and filled with an entire jar of peanut butter, a jar of strawberry jam, and one pound of bacon. “Feeds eighteen people or one Elvis.”

To make up for an almost total absence of plot, the movie sends them skinny dipping, forces them to spend the night together naked in the same sleeping bag, babble incessantly about international copyright law, and compare notes on “the greatest place you ever had sex”. Wallace is now hopelessly in love, but tries to fit into her definition of no-strings attachment. Joining her boyfriend for dinner, he accidentally pushes him out of a window and the guy ends up in a hospital. He seeks advice from his best friend Allan (Adam Driver), who is Chantry’s moronic cousin, and she turns to her sister Salia (Megan Park), who clearly has plans to seduce Wallace herself.  The contrived script by Elan Mastai conveniently moves Ben to Dublin, where both Chantry and Wallace show up with disastrous results. The movie wafts aimlessly while extraneous characters pop up to blurt inanities at each other in an attempt to lend the spontaneity of a TV sitcom with a laugh track. (When Wallace arrives to babysit his nephew, his sister rushes out “No treats, no horror movies, don’t let him go up on the roof, and don’t sell his organs on the black market!”) The movie talks itself to death.

Shovel your way through the artificial dialogue and the sluggish direction by Michael Dowse, and all that’s left to keep it going is the charm of the two leads, who give it all they’ve got and then some. Eventually, through their efforts, something of a point emerges. If Wallace confesses his true feelings for Chantry, he runs the risk of losing his best friend. If he keeps them to himself and remains platonic, he could lose the love of his life. What if Mr. Radcliffe finally gets his chance to “put my junk inside your trunk”? What if he does it in a better movie than What If? Could I see that recipe for Fool’s Gold again?