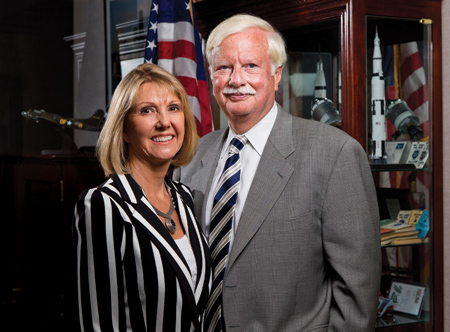 On the table near the entrance of Dave Pequet’s office is a miniature bronze statue of a bull and a bear—symbols synonymous with the stock market. This is appropriate given that Dave is founder and CEO of MPI Investment Management, a financial advisory firm in Hinsdale. Yet on closer observation, one notices the walls of his offices are decorated with military pictures and memorabilia—another fascination of his. A self-proclaimed “avid military supporter,” Dave followed in his grandfather’s footsteps and became a pilot in the Navy. His uncle Roger Chaffee was an Apollo astronaut. It’s no surprise that Dave, his wife Chris, and a mutual friend, Shirley Tolbert, have made it their mission to bring awareness and support of American veterans to Hinsdale.

For years, the Pequets have donated both their money and time to several military charities, including the Wounded Warriors Project. But for the Pequets, the desire to host an event to support veterans came to fruition when they mentioned it to their long-time friend and now co-chair, Shirley. “I told Shirley that I’d love to make this project local,” Dave says. Shirley, who has a grandson who is a captain in the Army, was happy to join forces with the Pequets to make this happen.

After selecting the charity Operation Support Our Troops-America and connecting with founder, Deborah Rickert, Shirley was put in touch with Sean Makoff, general manager of McGrath Acura in Westmont. Sean graciously donated the space to host the upcoming event on September 13.

Among the attractions on September 13 is for guests to meet Deborah. Deborah was recently honored as the Rotary Club of Chicago’s Woman of the Year. She began the nonprofit organization when her son Dan joined the The United States Military Academy at West Point, after the September 11 attacks. The event is being catered by Tommy R’s, a local Hinsdale catering service, and the National Anthem is being sung by Maggie Umsted, a fellow Hinsdale resident who has sung with the USO. The keynote speaker is Lt. Colonel Ryan Yantis of the United States Army. Lt. Colonel Yantis was a Public Affairs Officer on duty at the Pentagon during the attacks on September 11. And because the theme is “Red, White and Blues,” the Chicago Blues All-Stars Band will be playing throughout the evening.

One thing that Dave, Chris, and Shirley want everyone to know is that they hope to grow this fundraiser into an annual event. “I hope to make people aware that this is not a one-time event. It’s a beginning,” Shirley says. “We hope to see it grow bigger and better every year.”

Dave and Chris echo Shirley’s sentiment. “We would like to raise as much as we can for Debbie’s group,” explains Dave. “We hope to make this an annual event and watch it grow.”

For event information, visit redwhiteandblues.org. Tickets are $150 each and tables of eight can be purchased.