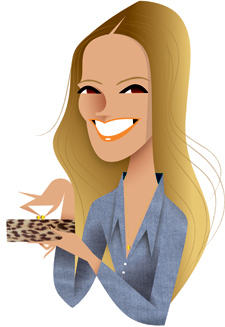 If you knew Alixandra (Alix) Chesno as a child, you’d probably think she’d grow up to be a famous tennis player. After all, she started playing tennis at the age of 3, and by 11 years old, this Rochester, New York native had moved away from her family to play tennis full-time in Florida.

It wasn’t long before Alix found herself competing at the University of Arizona. When she won the NCAA Division 1 Doubles title in 1993, she turned pro and traveled the world playing professional tournaments.

So how did this accomplished tennis player find herself celebrating her 10th anniversary this summer as a successful fashion retailer? “I actually think it’s the athlete in me,” says Alix, who today headquarters her business in Phoenix, Arizona. “I’m very goal oriented and always wanting to be better. If something’s not working, I want to fix it.”

According to Alix—owner of Hinsdale’s Alixandra’s Collections, Alixandra Blue, and Hollis—her business has grown organically. “I’d love to say that I had this big strategic plan and that each year I would open so many locations, but that hasn’t been the case for me,” she explains.

But Alix did always know that she wanted to own her own business one day. After having her second baby and making a home in the Hinsdale area with her husband, the time felt right to hang her shingle. “My first retail space was above the furrier in downtown Hinsdale,” remembers Alix, who at that time was selling mostly silver jewelry. “In the beginning, everything I did was trial and error and figuring out what our customers were looking for—what interested me, what interested customers, what sold, and what didn’t.

“I always had an interest in finding jewelry lines that had good value, good price points. I do like finer things—who doesn’t? I like expensive cashmere, but I like to pair it with a $20 bracelet. My customers [at Alixandra’s Collections] have told me that’s what they respond to most in our stores, is that there’s a mix. They have a choice.”

In downtown Hinsdale, Alix’s stores are within blocks of each other. “Alixandra Blue has the clothes that I love to wear, a little bit higher end. At Hollis, which is named after my mother and located right upstairs of Alixandra Blue, I buy specifically for her. She’s a New Yorker, she’s very stylish—but she works. There has to be a practicality to the types of clothes she wears and I think about her when I’m on my buying trips for Hollis.”

Even as her business has grown, Alix still leads the buying process for her stores. “We’ve recently added a new person to our buying team so there are now three of us who do it,” says Alix, who adds that her style has evolved as her customer’s has. “But I go on every buying trip. It’s important that what we’re selling reflects what I’m excited about.”

Now living in Arizona, Alix likes to infuse her Midwest offerings with a little West Coast flair—and vice versa—a few Chicago sensibilities into her Phoenix flagship. “It’s a constant struggle dealing with the seasons,” she says. “Sometimes I forget just how long and cold Chicago winters can be. At the same time, I have to offer color in Phoenix. I can’t bring black, white, and grey into the store [like I do in Chicago] and think it’s going to sell.”

Heading into this year’s season for fall fashion, Alix—who admits to while loving trends, she truly appreciates classical style and timeless pieces—notes that there’s not one big standout trend that will define this year’s fashion market. “I feel like we’re in this space where we’re doing some things that we’ve done before. We’re going to see a lot of layering of chains and mixing metals. Leather moto jackets are big again and I’m seeing lots of ripped and distressed denim, coated denim—we’ll definitely have this in the store.”

Having closed in on a decade in the fashion business, the love of selling keeps Alix engaged and energized about her business. “The key to juggling everything in my life is really good staff. And really good customers. A lot of my customers have become great friends. Retail isn’t for everyone. I’ve been really lucky to be so fortunate.”