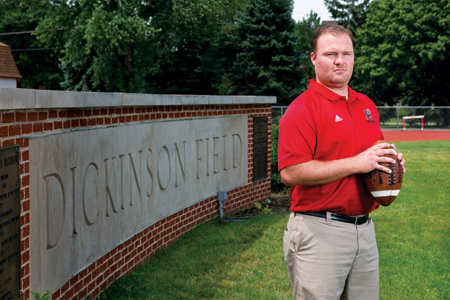 Dan Hartman always seems to be trying to learn new things. About the same time that he was named Hinsdale Central’s new head varsity football coach in May, the 30-year-old was finishing up his second master’s degree.

He also has flown across the country to meet with college coaches about their offenses.

And, most recently, Dan spent the summer doing his homework on Hinsdale Central’s program, getting input from a variety of sources: graduated players, former Red Devils football coach Ken Schreiner, and parents of lower-level players.

“I think they’ll find out I’m pretty driven,” says the coach. “The toughest thing is just getting to know everyone [players, coaches, administration, youth program, and football club] > involved in the program in a condensed amount of time.

“I’m trying to learn about the things that need to be changed to make the program just a little more successful,” Dan says.

That quality has helped him achieve success not only on the field, but also in the classroom. During his three seasons at Evergreen Park, he had a combined 27-9 record and three state playoff berths. Prior to his arrival, Evergreen Park was struggling, sporting an 18-37 record over the previous six seasons.

“In order to be a good coach, you have to be a good teacher,” says the social studies instructor. “Teaching is really a passion of mine. If you can teach in the classroom, a lot of the same things that you’re doing will transfer onto the field. For me it’s about organization and motivating the kids, making it a step-by-step process on how to get things done to be successful.”

Under Dan, Evergreen Park finished 10-1 last fall and claimed its first undefeated South Suburban Red conference title before a second-round upset playoff loss. He led his 2012 team to a 9-4 finish and a run to the Class 4A state semifinals as a No. 7 seed. His 2011 squad went 8-4 and reached the state quarterfinals as a No. 13 seed.

“What we’re looking for at Central are excellent coaches that are also excellent teachers, and Dan definitely fits that bill,” Hinsdale Central Athletic Director Dan Jones says. “It benefits us that he is a younger coach. He’s got a lot of energy, and kids are going to feed off that. Plus, him being a young coach means that we should have him around for a long, long tenure.”

Dan Hartman played wide receiver at Division III Thomas More College. He then had assistant coaching jobs at Cascade and Crown Point high schools in Indiana before landing at Evergreen Park, where he also called the offense.

“When I got to Crown Point High School, I got put on the defensive side of the ball. Looking back at that, it was one of the best things that ever happened to me. It allowed me to learn both sides of the ball,” Dan says. “That really helped me as a head coach.”

What also helped Hartman on the offensive side were his trips to West Virginia and Oregon the last two years to meet with those college staffs about their spread attacks—schemes similar to the one he uses.

“My philosophy on offense and defense is that you always want to be something a little bit different than what your opponent will see on a weekly basis. That might give you just little bit of an advantage,” he says.

“Most people, when you say spread offense, they automatically think you’re going to be throwing the ball 30 to 40 times a game,” adds Dan. “That’s not the case. We would like to spread people out to run the ball and with varying tempos. So I guess you could say it should be exciting for the kids, exciting for people to watch.”