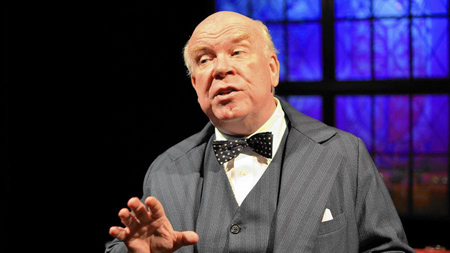 A poor student and a studied disappointment to his socially prominent parents, this sharply etched piece details Winston Churchill’s life as he slowly rises to become one of the powerhouses who helped end World War II.

Actor-playwright Keaton begins this tale as Churchill sets out to address the populace of Westminster College in 1946. Having just lost his bid for re-election as the British Prime Minister, Churchill’s heart is sore, but he is full of bons mots and amusing stories about his past. Emerging as one of the most natural of memory plays due to Keaton’s detailed research and skill, we duly follow Churchill’s journey from unhappy child to wartime journalist to one of the most respected men in the world. Passionate, loyal and uncompromising, Keaton visits Churchill’s strengths as well as his flaws, making for a truly fascinating portrayal of a wonderfully complex man.

Performance wise, acclaimed director Kurt Johns allows ample room for Keaton to be charming. But he, also, helps Keaton dig deeper than mere surface amusements. Thus all of Churchill’s crusty stubbornness and sorrow is on full display, as well. A moment in the second act when this powerful personage reflects on the death of a friend, Franklin Delano Roosevelt, is one of the show’s truly tender, fully realized moments. Keaton, also, touches hearts by fully portraying the devotion Churchill had to his straight shooting wife, Clementine.

Importantly, while full of vital history for the knowing and the uninitiated both, this show is never boring. Most vitally, though, Keaton and Johns prove that Churchill’s story is ultimately a message of hope. Hope for the potential that we all have to succeed even our own expectations.