Known just as well for his dramatic turns as his comedies, Robin Williams had a signature style of a lighting-fast way with words, dropping effortlessly into accents and impersonations, and then letting it all fall away to show us the sincerity and humanity underneath. He leaves behind not only an array of fantastic films, but certain themes he kept returning to in his work, guiding us with his choices to the things that truly meant the most to him: Leading a unique life, the importance of family, teaching children to find their courage, and letting go of the things that are holding you down. 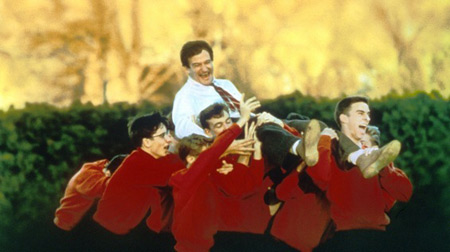 Williams plays John Keating, an unconventional teacher at a rigid boarding school. While his students (Ethan Hawke and Robert Sean Leonard among them) learn about expression and poetry in his class, it gives them the courage to break the mold of their families’ rigid expectations, stop memorizing the feats of their others, and carve a path for themselves. He expounds on the themes of self-expression and seizing the day in scene after scene, continually reminding the boys in his class how short life is and to leave your mark upon the world. Obviously, in light of recent events, and the fact that this film contains a suicide, this one stings a little more than the rest of the list. Director Peter Weir uses a very naturalistic style to seal us within the stone walls of the private school lifestyle, letting Williams bring the spirit of discovery and fun into the story with every scene in which he appears. The moment at the end has been mirrored in many a social media posts this week, as the students he inspired stand on their desks and salute him with “Oh, Captain, my Captain,” as he exits the room.

Williams plays Pater Banning, a boring, grown-up version of Peter Pan who has no memory of his time as the leader of the Lost Boys in Neverland. When Captain Hook (Dustin Hoffman) kidnaps his children, Peter must remember his past, regain the trust of the Lost Boys, relearn how to fly, and re-embrace the magic of youth and Neverland. Along the way he also reexamines his priorities, vowing to work less and spend more time with the family that he loves. Williams reverses his usual theme here, as the working stiff who lost his joy and imagination, it’s up to the children to bring the spark back into his life. With an incredible cast and direction by Steven Spielberg, Hook had everything going for it. However, as a family film in the early 90s, cynical reviewers criticized its simple construction, overlooking its sincerity and family-friendliness. Families and children in particular loved this movie wholeheartedly and it has a large cult following who remember it as a classic. 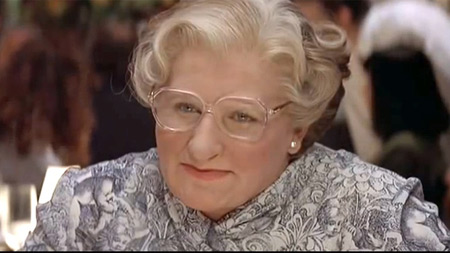 This time Williams plays Daniel Hillard, a father who spends his time with his children goofing around and having fun, leaving his wife to act as sole disciplinarian and breadwinner. After their divorce, the only way he can spend more time with his kids is by disguising himself as a lovable Scottish nanny. The ruse allows him an outsiders view to his failings, forces him to learn responsibility, all while injecting fun into his depressed children’s lives and making himself indispensible to the family. It also allows him the opportunity to try and foil the advances of his ex-wife’s new suitor (Peirce Brosnan). This movie really allowed Williams to stretch his comedy legs. He improvised at length, used many imitations and voices, and played every emotional beat perfectly, earning him the Golden Globe for Best Actor in a Musical or Comedy. Again, we see the theme of a man looking to strike a balance between his imagination and responsibility, and between his desire for meaningful work and spending time with a family he adores. 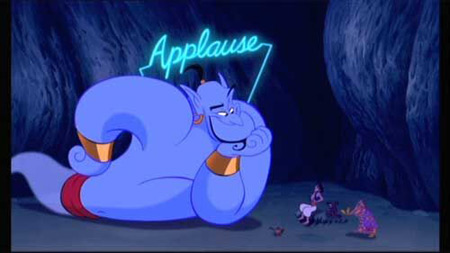 In this beloved animated Disney film, Williams completely changed voice acting while voicing the role of Genie, the magic, wish-granting being who helps Aladdin in his quest to woo a beautiful princess. Apparently, when it came time for Williams to record, the filmmakers would give him themes and a few scene touchstones before turning him loose to ad-lib dialogue at length. Most of Genie’s dialogue in the completed film came off the top of Williams’ head in the moment and it’s that performance that generates most of the film’s funniest and memorable non-musical moments. This film, more than any other, proved that Williams could hold an audience in the palm of his hand while embedding himself in their hearts. 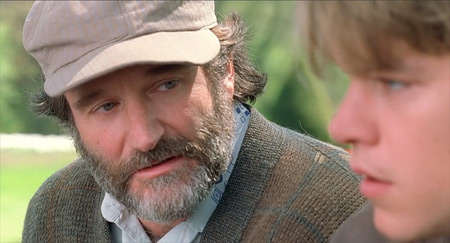 This is the one that got him the Oscar. Williams plays Dr. Sean Maguire, a workingman’s psychologist who needs to break through the machismo exterior of a young tough guy from South Boston (Matt Damon) so he can embrace his gift as a genius mathematician. Buoyed by great dialogue and a story that hinges on deep character moments and genuine human connections, this flick was nominated for a ton of Academy Awards. It only won two: Best Original Screenplay for Ben Affleck and Matt Damon, and Best Supporting Actor for Robin Williams. Simply thinking of the scene when Williams absolves Damon of his history of suffering abuse by repeating “It’s not your fault,” just DESTROYS me. He is absolutely brilliant in that scene and brings all the empathy in the world to a very quiet, delicate, human exhange. Deeeeeeeestroys me. Do yourself a favor, do not YouTube that action when you’re in a public place, people will think you just lost a loved one. Because you know what? We just did.