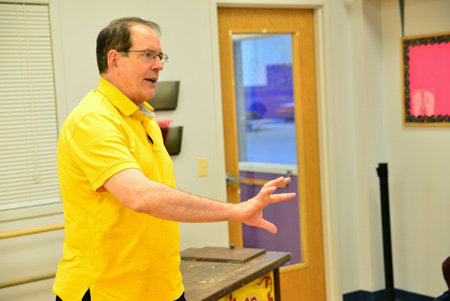 But a recent conversation with David H. Bell, the distinguished director of The Marriott Theatre’s upcoming production, revealed the unexpected feminine power that the theatrical version of the piece holds. Co-scripted by the brilliant Betty Comden and featuring unique female archetypes, On The Town is, surprisingly, rarely produced. Below, Bell discusses why and revels in the theatrical magic that he is experiencing while working on this historic event.

Hinsdale Living: We adore Betty Comden! On The Town was her first big show with her artistic conspirator Adolph Green. She eventually went on to become one of the only female powerhouses of the golden age of Broadway.

David H. Bell: Other than Dorothy Field, yes, and she kind of came out of nowhere! Of course, she was working in a revue. It was a sketch comedy act, The Revuers. She was working with Green on that while she was still going to school at Columbia. The two got together and started that with Judy Holliday. The Revuers were really great and their accompanist was a young fellow named Leonard Bernstein. In fact, the page turner for Bernstein was Aaron Copland! It was a collection of the next generation’s best talent.

Bell: There is, also, a sensibility in the show, itself, that the women’s roles are so much more aggressive and in, many ways, more interesting than the males. The women are the more unique types. The men are wonderful types of navy sailors who are off on a day. They’re naïve and young. But the women are the spice of the piece. It was very not typical of that day and age in the writing.

That must be wonderful to work on.

Bell: Amazing! It’s just amazing! All eight of the principals are spectacular. It’s been some of the most fun that I have had working in a very long time. I just love being in the room with it as it grows and develops.

Bell: It totally surprised me because it’s such a standard. But it isn’t done very often. It’s so hard to cast. You need a cast for a ballet and a cast for a Broadway musical. In the 1940s, it opened on Broadway with a cast of 45. They could afford both. Now, it’s much harder to get a cast of 22 to do all the singing, dancing and acting requirements. (Laughs) So, sometimes it’s easier just to not do the show!

But, you’ve made it work!

Bell: I am so grateful for this company. The Marriott, over the years, loves casting, locally. We try to do that with the shows. In this case, with the male dancing technique we needed, we brought 7 dancer-actors in from New York. For us, that’s a very large number. This was a real exception because of the demands of the piece. There were, also, a large number of talented local dancers doing Brigadoon and that was a factor in going to New York to find the additional dancers, as well.

Has anything about the process stood out for you, overall?

Bell: Our choreographer, Alex Sanchez has been a friend of mine for over twenty years. His work on this show is exemplary. He was in the cast of Fosse and has done at least a dozen Broadway shows. His choreography here is reminiscent of the storytelling of Jerome Robbins. It’s very moving to me. There is a moment at the end of the “Lonely Town Ballet” when I got chills. We were seeing something really unique. It’s rare privilege to be involved in a musical that I have never done and that the Marriott has never done.

On The Town begins previews on August 13 at The Marriott Theatre, 10 Marriott Drive, in Lincolnshire. Regular performances begin August 20 and end on October 12. Tickets are $40-$48 and can be purchased by calling 847-634-0200 or by visiting marriotttheatre.com.