The real restaurant wars this summer are taking place on the big screen, in Lasse Hallstrom’s delectable, satisfying comedy about competing cuisines and clashing cultures, The Hundred-Foot Journey. Produced by Steven Spielberg and Oprah Winfrey, it arrives loaded with credentials and the food is its own reward. See it between meals, and you’ll go away starving. 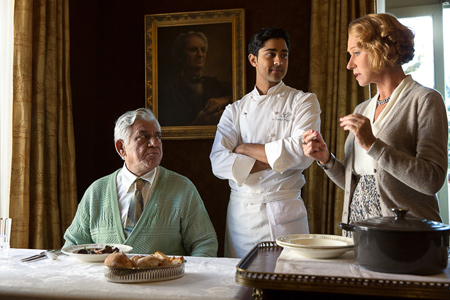 Helen Mirren and Om Puri, the great patriarch of Indian cinema, co-star as rival restaurant owners who wage a battle for gastronomic supremacy from the first appetizer to the final cognac. Let the best menu win. From Mumbai, the displaced Kadam family, from a long line of restaurateurs dating back to the British RAJ, arrives in the south of France looking for a new home and a future full of promise, when their automobile breaks down in a small village and Papa (Om Puri) declares the warm, verdant surrounding valley the perfect place for a new Indian restaurant. There’s only one problem. The town already has a reknowned restaurant with a Michelin star named La Saule Pleurir, so famous the president of France dines there. Undeterred, Papa buys an abandoned ruin across the road, and sniffs they might have frogs legs and escargot, “but do they have tandoori goat?” So under his father’s supervision, Hassan (Manish Dayal), the handsome Kadam son who was taught by his late mother “an education for all the senses” and dreams of becoming a great chef, begins to fix up the place with the aid of his brothers and sisters, and open his kitchen. All of which goes down like arsenic with the elegant, haughty and imperial Madame Mallory (Helen Mirren), who dismisses the new enterprise as a tacky ethnic intrusion of fast food and gives it a few months at best. Against all odds, the Kadams open their little bastion of curry and spices, but in an effort to be friendly they make the mistake of showing the territorial Madame Mallory their menu in advance. She buys out the whole market of all their ingredients. In her world, Michelin is the Bible, their star ratings are the gods, and she’s not going to jeopardize her success at any cost. Contrasted with the elegance across the road, the new Maison Mumbai with its electric lights and pop art looks gaudy and whimsical. But the universal theme is that food is the one international language that transcends bigotry, snobbism, prejudice, and cultural and religious differences of every kind, and the movie is about how the two opposites unite, winning each other over with flavor. While Hassan learns to master béchamel and veloute sauce, Madame Mallory is eventually lured across the road by the enchanting aroma of madras curry, even adding a dash of cardamom to her classic boeuf bourguignon. The two restaurants, as well as the lifestyles, may only be 100 feet apart, but making the trip takes a lifetime. 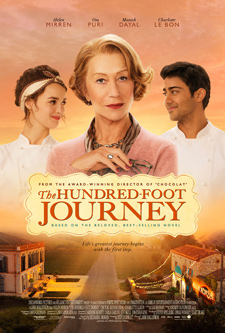 The movie doesn’t stop there. Unfortunately, the pace and the fun drag out to more than two hours with subplots, as Madame Mallory offers Hassan her only true test of a great chef—the ability to make a perfect omelette. The surrender in her eyes when she finally tastes it is the only true test of a great actress. So she offers him a job in her restaurant and catapults him to celebrity status while he falls in love with her pretty sous-chef Margeurite (Charlotte Le Bon). He’s already a great chef; she provides the stepping stone he needs to become a famous one. And he pays her back by eschewing the world’s most coveted jobs to return from Paris to La Saule Pleurir to win her a second Michelin star.Based on a novel by Richard Morais, the bland screenplay by Steven Knight compiles facts without the sweeping romantic hallmarks or dramatic conflicts that grace Lasse Hallstrom’s best films (Chocolat, The Cider House Rules). But Linus Sandgren’s lush camerawork and the glittering, throbbing musical score by A. R. Rahman contribute a distinctive flavor of their own. The performances are superb. Helen Mirren and Om Puri are as equally dynamic in bombastic moments as they are in subtle expressions of feeling in the wordless passages, and Manish Dayal is a real discovery. The food has never seemed more sensual. This is the first time I’ve ever seen chickpeas with chutney look as enticing as roast canard in saffron sauce with truffles