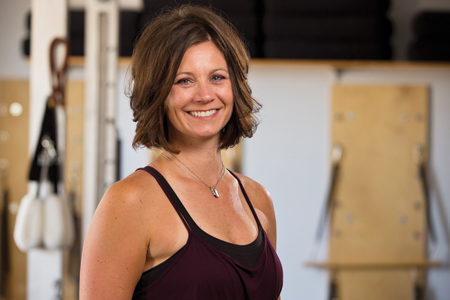 The power of collective teamwork is such a strong force, especially when the goal is giving back. This is one of the core beliefs of the Authentic Pilates Union (APU) and Dana Santi, owner of The Pilates Core in Western Springs. For Dana, a simple weekend Pilates conference has evolved into a mission to help various charities around the world.

Dana, a Level 1 Pilates instructor, opened The Pilates Core in La Grange in 2002. Soon after, Dana began hosting the Chicago Pilates Conference, where famous guest instructors teach courses and seminars to Pilates loyalists. It was during her 2009 conference that Dana and the other instructors realized that something was lacking in the Pilates world. “We were seeking out a way to find our ‘family,’” says Dana. “So we created it.” And, in 2011, the Authentic Pilates Union was born.

Dana, along with famous Pilates instructors like Kathryn Ross-Nash, Brooke Siler, Peter Fiasca, Mari Winsor, Colleen Strong, and Chris Robinson, created a union dedicated to preserving the authentic work and philosophy of Joseph Pilates. The APU proudly preserves the classic method of body conditioning while welcoming all persons interested in studying Pilates, from the casual student to Level 1 instructors. “We are all about continuing education. We don’t care what training you’ve had,” explains Dana. “But what we choose is the classical method, so that’s the continuing education we are going to offer.”

While all the members and instructors who are part of the APU enjoy continuing their education, it’s perhaps of equal importance that they give back to the communities in some way, preserving not only the classic method in which Joseph and his wife Clara taught, but also preserving their benevolence toward others.

Dana recalls hearing stories about the generosity of Joe and Clara Pilates from their studio days in New York City. “So,” says Dana, “there’s this generosity that has continued down the Pilates food chain.”

Like Pilates itself, the concept of the Pilates Give Back Day is simple yet effective. The members of the APU choose one day out of the year where all profits made from their studios goes to charity.

One of the goals of the APU is to literally become a “powerhouse of giving,” thus every year members of the APU vote on donating to five national charities so their impact is not weakened by spreading the donations too thin. This year, the APU members voted to donate to the Play Foundation, St. Jude Children’s Research Hospital, Autism Speaks, Action for Healthy Kids, and Cancer Support Community. The participating APU member/studio then selects one of these five charities and donates to it.

APU studios and instructors offer classes and private lessons, mixing things up and making it fun in order to raise the most money on that day. In the past, studios offered such classes as spine corrector, beginner mat, reformer, and children’s classes. Studios also bring in guest instructors to donate private lessons. Patrons of the studios are encouraged to bring friends and family to participate in the activities.

Because all the profits go to charity, there is no set fee for services, so each participant is asked only to donate what they can. Also, there is no limit to the amount or types of classes one can take.

In doing this, the APU accomplishes many important goals for Pilates advocates and communities across the country. Among other things, the Pilates Give Back Day is an important day to raise funds for not-for-profit organizations, it’s an example of how the Pilates community is committed to the health and well-being of others, and it helps keep Pilates true to the classical format in which Joe so passionately instructed.

It’s also a great way to encourage friends to try Pilates for the first time. Chances are, like Dana, they will love it. Giving back is just a bonus. “I don’t think there’s anyone (Pilates instructor) that wouldn’t say what they get out of Pilates—physically and mentally—and what it has done for them over their life can have a price put on it,” says Dana. “So we are giving it back.”