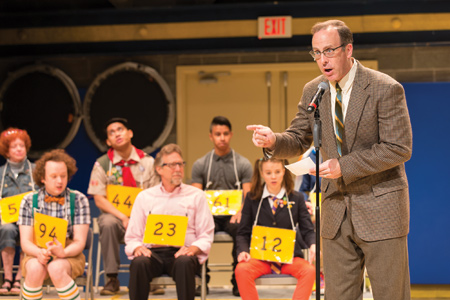 Joe Dempsey always knew he wanted to be an actor. Originally from California, he moved to Hinsdale at the age of 3. Now starring in the Tony Award-winning musical comedy The 25th Annual Putnam County Spelling Bee as Vice Principal Panch, Joe tells Hinsdale Living magazine how growing up in Hinsdale helped shape his career in various ways.

Hinsdale Living: How did you get started in acting?

Joe Dempsey: My parents acted, staged managed, and did costumes (at the Theatre of Western Springs). My childhood was spent organizing the Box Office mailing list. My dad had all the files, and we had to send out subscription letters and things like that.

How did growing up in Hinsdale support your acting bug?

Hinsdale prepared me for a career in the arts with its proximity to the theatre scene of Chicago, the Theatre of Western Springs, and the summer concert series at Katherine Legge Memorial Park.

You worked in the Second City Training Improvisation Program for two years. What’s your favorite part of improv?

(Laughing) One time, Stephen Colbert on stage, told me that my fly was down. So that was nice. I like creating something out of nothing. And you don’t even know where it came from. You’ll say something that you didn’t even know you were going to say until you say it. So it’s pretty magical.

Any actor can take a well-written script, rehearse it, perform it, and, given a company of fine actors, create something with a wow factor. But improvisation is much more challenging. Improvisation is really hard to do well. You have to be really, really good at it. And, in learning how to do it well, you spend a lot of time doing it badly. It’s a long process to get good at it.


As an actor, you have worked in television, on movies, and on stage. Which do you prefer?

Stage acting. Every actor likes stage acting better because it’s live and the audience is right there. You get the immediate response as to whether or not the material is working. When working in television, you wait around for eight hours while everything is lit and the camera is set up so you can say two sentences. You then come back the next day to wait eight hours again to say two more sentences. The dance with a live audience is different every night.

Do you still get nervous for auditions?

Absolutely. All the time. It’s very frustrating. My hardest audition is any that I have to sing in. I immediately start sweating.

What’s the toughest part about being an actor?

The hardest part is dealing with rejection. The rejection is really hard. I wish I had been told that as an actor I would have to audition every day. You’ve got to gear up for it and prepare, and each audition is a lot of work. And, 85 percent of the time, you don’t get (the job) and that’s really hard.

What’s the best role you’ve ever had?

My favorite was playing James Leeds in Children of a Lesser God. William Hurt did the movie version with Marlee Matlin.

What role have you always wanted to play and hope to pursue someday?

I want to play Tom in The Glass Menagerie. I’m probably too old now. Oh,well. Or either of the two leads in David Mamet’s Glengarry Glen Ross.

The 25th Annual Putnam County Spelling Bee will be playing at Drury Lane Theatre in Oak Brook through August 27. For more information or for ticket sales, visit drurylaneoakbrook.com or call 630-530-0111.