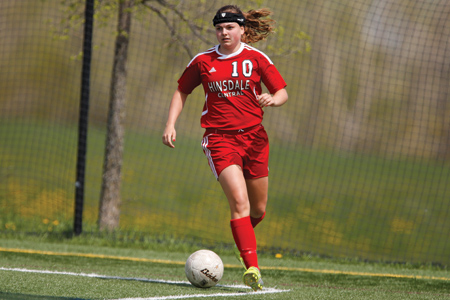 Ever since she started playing travel soccer in second grade, Hinsdale Central senior Alex Otto has been told that she’s not good enough.

But all Alex keeps doing is proving people wrong.

Instead of kicking shots in matches as a 10-year-old, she found herself “picking dandelions on the sideline.” Alex became a top player for the Chicago Blast Soccer Club team but had to absorb the disappointment of not making Hinsdale Central’s varsity team after tryouts last spring. Perseverance paid off when she earned a promotion to varsity three weeks later.

And it will yield another reward this fall, when Alex arrives at the University of Alabama at Birmingham campus and fulfills her goal of playing Division I soccer.

“When I was little, I was really bad at soccer, and I was told by multiple coaches that I wasn’t fast enough, I wasn’t good enough, I wasn’t serious enough,” recalls Alex. “Instead of quitting, I found that to be a very motivating factor for me.”

Alex even had to convince her parents, Shanna and Bill, to let her play travel ball.

“My parents knew I wasn’t very good, and they were like, ‘Are you sure about this? It’s pretty expensive,’” Alex says. “After two years of asking and begging, they finally let me play club. I sat on the bench a lot until I was about 12, because it was a really good team. That’s when I found that I was really passionate about soccer, especially when one of my coaches said I wasn’t tough enough to play at that high of a level. I worked really hard at it, and I just kept going from there.”

She did the same thing at Hinsdale Central last spring—after starting the season at the junior varsity level.

“I am a very competitive athlete,” Alex says. “JV is a fun team. It’s just not for me. I like playing at the really high competitive level, so I worked really hard to make sure (Hinsdale Central) Coach (Michael) Smith noticed me.”

He did. Alex soon contributed to the Red Devils’ state runner-up finish as a reserve center midfielder, scoring off a corner kick during their 2–0 supersectional win over Carl Sandburg High School, before Hinsdale Central lost to Naperville North 2–1 in the state title match.

This season, Alex has moved to center back as the Red Devils’ last line of defense in front of the goal.

“The goal that she scored in the supersectional was a product of her passion and her desire to prove me wrong,” the Hinsdale Central coach says. “I respect that there was an opportunity where she could step into that spotlight. She wasn’t afraid. That speaks to her character and mental fortitude, and it speaks to how resilient she is.”

Michael believes Alabama-Birmingham is getting a talented player who will only get better. Alex, who scored a 31 on her ACT, received an academic scholarship and will study physical therapy.

“Defensively, she’s a very good one-on-one defender, especially seeing the game, anticipating. She does a very good job knowing where to be in every situation,” the coach adds. “What I love about her, and what her teammates love about her, is that she shows up every single day ready to play. She sees every day as an opportunity to grow and to improve.”