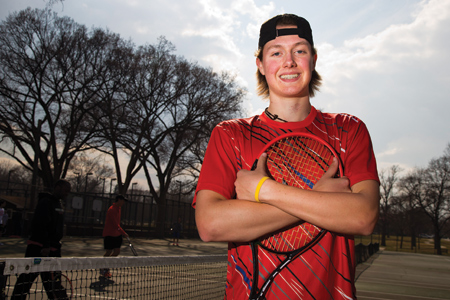 Hinsdale Central junior Martin Joyce didn’t know what to expect in his first high school tennis match two years ago on a cold spring day at Burns Field in Hinsdale.

Certainly not what happened—something that Hinsdale Central Tennis Coach John Naisbitt says, “showed Martin was in rarified air from the very beginning.”

Martin—then just a freshman—not only got the nod at No. 1 singles, but he also pulled off a stunning three-set win over eventual State Champion Jason Brown of Deerfield.

“By the time we were finishing, the sun was starting to set and it was getting darker,” Martin recalls of his marathon debut. “It was a really cool way to start off high school. It definitely was a huge boost. I think it set the tone for the season I had.”

Martin’s career has only continued to thrive from that point. The 6-foot-3, 175-pounder with a big serve went on to place fourth at state in singles as a freshman while helping Hinsdale Central win the state team title. Last season, Martin became the school’s first state singles champion since Tom Buetikofer in 1997 while spearheading his team’s state title repeat with a record 59 points.

“The biggest part (of winning state) is being able to be a part of history,” says Martin, who started playing tennis when he was 4. “There are a lot of good tennis players that have come through Hinsdale Central. To be able to be put on that list now is really something special.”

Another special moment for Martin came in January, when he made a verbal commitment to Ohio State University, the No. 2-ranked college program in the nation.

“It’s gotten me to work even harder now that I have this big thing ahead of me,” he says.

Now Martin has turned his attention to defending his individual and team state titles.

“I would be disappointed with anything but first again,” Martin says. “(The team) is even more motivation. To me, the team is more important than anything.”

That’s the kind of attitude that Coach Naisbitt has come to expect from Martin.

“He’s always been about winning,” Coach Naisbitt says. “He is so darn competitive. If you press him, he can really take his game up and up. He has outstanding mental focus, he’s physically a big kid, and he hits the ball incredibly hard. When he hits a serve, it sounds like the backfire of a truck. His skill set is really refined from thousands of hours of dedication and practice.”

Martin spends an average of three hours on the court five or six days per week and 30 or 40 minutes more on conditioning. That’s why he has made continued progress during high school.

“Just mentally, I’m tougher,” Martin says, crediting both Score Tennis Pro Robbye Poole and Coach Naisbitt for help in that area. “The serve is my biggest strength. Another one would probably be my forehand. And footwork is a big thing. I work on it a lot.”

Martin showed that mental toughness at the end of his 6–3, 3–6, 6–4 victory over Waubonsie Valley senior Eric Marbach in last year’s state final.

“When it got to be 4–4 (in the third set) I just remember thinking that this was going to be the game that I was going to break him (on serve),” recalls Martin, who did just that.

This season, Martin’s top challenger at state May 29 to 31 figures to be teammate Michael Lorenzini, who took third at state in singles last year.

“We’re obviously good friends and practice together all the time,” Martin says. “We push each other to raise our games.”