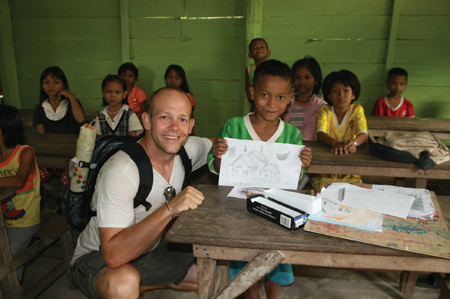 Mike Divelbiss, affectionately known as “Mr. D” to his students, has been teaching art at Brook Forest Elementary and Butler Junior High Schools in Oak Brook for 12 years. While art is his first passion, traveling the world by plane, boat, car, or train whenever is something he loves. But for Mike and his wife, Amanda, one of their greatest journeys began with a simple ride on a bike.

On a trip to Thailand, Cambodia, and China in 2012, Mike’s itinerary unfolded differently than he expected. “The plan was to spend only three days in Siem Reap, Cambodia, touring the temples of Angkor Wat,” says Mike. “Once we arrived in Cambodia, we found out that we needed to get our visas for China way ahead of time. So we stayed in Cambodia. We rented bicycles and decided to explore.”

“Our bike path turned from a street into a dirt road—very rural, very remote. It was a little scary, but we kept going,” laughs Mike. At last, they came upon The Friends of the Orphan Children Organization, a local orphanage for 33 children ages 5 to 18, with a school building consisting of just two rooms. When Mike and Amanda walked in, they couldn’t believe what they saw. “An entire room was dedicated to art,” Mike says. “I was completely blown away by the quality of their work.”

Mike was particularly amazed to see that while the children had very few material possessions, they still had art. “Sadly in this day and age in the states, art classes in schools have become a novelty. Here I am in a place where they don’t have any disposable income and yet believe that art is a necessity, so much so that literally half of their school was dedicated to making art. These kids were just so happy creating artwork.”

Mike spoke with Sophean Un, FOCO general manager, and set up to teach a lesson the next day. “I told Sophean that I would love to come back and teach them an art lesson on self-portraits. It was neat because while very few of them spoke English, they were able to follow the lesson by communicating through art.”

Mike recognized a bigger need than a simple art lesson. “They were busting at the seams,” he remembers. In order to expand the school, Sophean explained they needed to raise $3,000. “I wanted to come up with a creative way to help them.” So Mike asked that each student create a painting and a statement about the art written in English. He would then purchase each painting for $100. “If I just gave them the money, I would rob them of the opportunity to build [the new school] themselves. I prefer to empower artists, not just enable them.”

After selling some of his own artwork to raise money for the orphanage, Mike and Amanda sent a check for $3,300 to Sophean in hopes of receiving 33 pieces of artwork in return. When asked why he took the chance and sent a check before receiving the art, Mike responds, “Sometimes the best things in life aren’t planned. Sometimes you just have to go with your gut. It just felt right.”

After a few months passed, Mike received a box of artwork with a surprise attached to each piece. “The orphans wrote letters and attached a picture of themselves to complement their beautiful art. We plan on selling these beautiful paintings, while displaying their letters and photos at our art show.”

As for his hopes for art in the future, Mike says, “I want to continue to support people who believe art is worth keeping in schools. Despite their limited resources, FOCO provides each child with an opportunity to create art and I love that! This experience has been such a reminder that true joy comes from creating, not from material possessions. Art has always had that power and always will.”

The Annual Art Show for Butler District 53 will take place on Tuesday, May 13, at Central Park West at the Oak Brook Park District. For more information, visit butler53.com, or contact Mike Divelbiss at [email protected] or 630-325-6888, ext. 702.