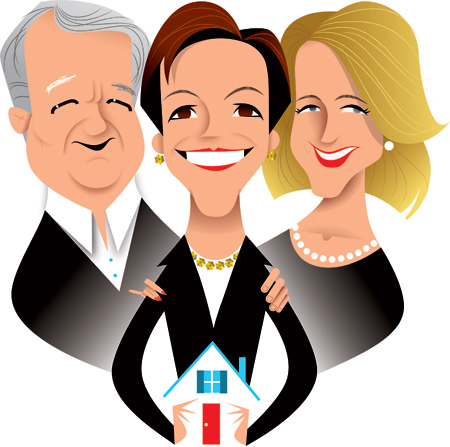 At Café La Fortuna, John and Penny Bohnen, owners of County Line Properties, and their daughter Courtney Bohnen Stach, one of the office’s top agents, take a rare moment away from work to grab a cup of coffee.

“We don’t usually have time like this during the day to catch up with each other,” says Penny, who founded County Line Properties in 1991. “I love coming here [to La Fortuna], though, because it’s a family-run business just like ours.”

Soon after hanging her shingle, Penny’s husband John joined the company. A lifelong Hinsdalean—five generations of his family have lived in the area—John’s past career life in construction gives him a unique perspective on the local real estate market. “We’ve been involved with the community for so long that we can help people hit the ground running when they move here, way beyond just where they are going to live,” John says.

John and Penny have lived in a historic Hinsdale home on E. First Street for more than 40 years. It was the boyhood home of Paul Butler, the founder of the Village of Oak Brook. Their three daughters—Courtney, Stephanie, and Ashley—all grew up there and now have children who love to play in their grandparents’ home. If those walls could only talk, we are certain the stories would be fantastic.

“It’s been a great house,” says Penny with a knowing smile. “I don’t think it’s in the cards for us to downsize and have a home somewhere else. We wouldn’t want that anyway.”

“Our house is a resort for non-paying guests,” adds John with a laugh. “Our grandchildren love it there.”

John and Penny’s love for Hinsdale and its charm are at the foundation of their real estate business. “One of the nice things about being a boutique office—not part of a franchise—is that we get to represent quality products,” John says.

“All things great and small is how I like to think of it,” adds Penny.

John looks at the comparisons people make between County Line Properties and the larger franchises as a good thing. “It’s David and Goliath,” he says. “I love being David. Size matters. We’re small by design.”

When County Line Properties first opened, they refused to hire anyone from a competing office. Instead, they hired people new to real estate and trained them in the County Line way. Today, the office has 36 agents (all of County Line’s agents are local residents, most of whom have been with the company since its inception; the Bohnens consider them part of their extended family)—their daughter Courtney, among them.

“Courtney is a sales animal,” says her father—and her boss. “She’s very modest, but she sells a whole lot of real estate. She has a good following for all of the right reasons.”

Courtney, who lives in Clarendon Hills, represents a growing population of people moving from the city to Hinsdale and the surrounding suburbs. “We’re selling homes, not houses. When we’ve done right by our clients, we’ve done a good job,” says Courtney.

“It used to be that when people were choosing between the western suburbs and the North Shore, about one out of four would choose the west,” John adds. “But today, it’s about 50/50. At the end of the day, if you work in the city and live on the North Shore, you’re not going to turn around and go back downtown for dinner. But if you live out here, you can.”

Living together—and working together—isn’t something everyone can do. But John and Penny make it look easy. “We’re kind of funny together,” says Penny. “We get along so well. Real estate is tough enough. We don’t need personal stuff making it difficult.”

Courtney agrees. “Just last week I wrote them a note telling them how lucky I feel that I get to work with them every day,” she says. “Our family works as a team and we treat our clients like family. Once a client works with us, they become part of our family forever.”