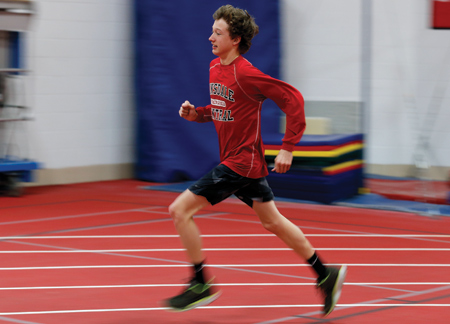 Anyone who has driven through Hinsdale over the last few years probably passed by Billy Magnesen at one time or another. “I think I’ve run up Grant Street about 1,000 times in my life,” he says.

Billy has piled up lots of miles on the pavement as part of his training for the Hinsdale Central Boys Cross Country and Track teams. “The most mileage I ever ran in one week was 76 miles. That was a good week. I probably average in the high 60s,” he says.

All of that training and commitment paid off for Billy and his teammates last fall. Hinsdale Central’s Boys Cross Country team raced to its first state championship in school history, topping the Class 3A field with 99 points, well ahead of runner-up Downers Grove North (144) and third-place O’Fallon (157). Billy finished ninth (14 minutes, 41 seconds for 3.0 miles) to lead the Red Devils, who placed four runners in the top 29.

“I don’t think I’ve ever felt better than in that (winning) moment, realizing that everything that we put into it had finally come through,” says the distance ace, who placed 32nd at the 2012 state meet.

His individual finish put him in elite company. He equaled the best individual state performance in the Hinsdale Central era by Jon Thanos (1982) and John Herbert (1975). Hinsdale High School’s Dave Hahl’s sixth place in 1954 is the all-time best finish.

“I’m obviously happy that I was able to be all-state, but that was completely overshadowed by what our team achieved,” says the Red Devils senior, who will run for the University of Illinois this fall.

Billy’s success is especially impressive considering he had planned to play a different sport at Hinsdale Central. “I played soccer through all my elementary school years. I went to high school planning on being a soccer player,” he says. “Basically, I ran track my freshman year as conditioning for soccer. I still love soccer. Things worked out luckily. I think I made the right choice.”

Hinsdale Central Cross Country Coach Jim Kupres has seen him steadily develop into a top-notch competitor. “He came out for indoor track (as a freshman), and he didn’t jump out at you where you’d say this could be an all-state runner. But we did see some potential,” Jim recalls. “He totally became committed to training and was excited about it and looked forward to becoming better each season.”

The state title not only is a great memory for Billy, but it also serves as a driving force for his upcoming track season. He has his sights on all-state honors in the 3,200 meters. “I think about it all the time,” he says. “The background of my computer is (a picture of) me carrying the state trophy. That day will never fade away from my memory. Every day when we have tough workouts, we’re like, ‘Remember state. Remember how long it took to get there, how hard that road was and this day is just another one of those days.’ That really helps to get you through those everyday workouts.”