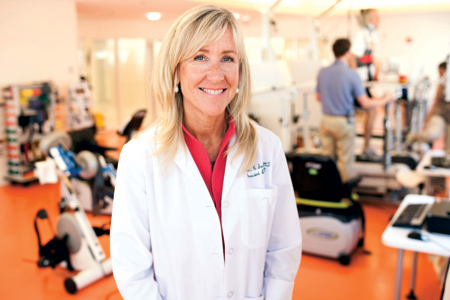 When Joanne Smith attended medical school at Michigan State University, she joined a pediatric orthopedic rotation. One day she opened the door in a waiting room to a free amputee clinic for children in Grand Rapids.

“There had to be 50 to 60 severely disabled children literally without half their bodies,” says Joanne. “But these kids were giggling and laughing. That everyone was so happy and so normal, I was in shock.”

Joanne fell in love with the rehabilitation field. Today, she is president and chief executive officer of the Rehabilitation Institute of Chicago—ranked the No. 1 hospital of its type in the country by U.S. News & World Report every year since 1991.

Far from resting on its laurels, Joanne is steering the non-profit into a new era. With its 182-bed facility on Superior Street struggling to meet demand, she has launched the drive to build a bigger facility. Scheduled to open in 2017, the sleek $550 million building at 355 E. Erie will feature a new name: The Ability Institute of RIC.

“It’s literally the only project of its kind anywhere on the planet,” says Joanne, a Hinsdale resident in her early 50s. “No other organization is investing these types of resources in the field. We’re almost creating a whole new category of medicine.”

Already, Joanne and her staff—including Tom Sullivan, recruited from Ann & Robert H. Lurie Children’s Hospital—have raised about $200 million. The number of beds will increase by a third, while outpatient care service will jump fourfold.

And the name—emphasizing ability rather than rehabilitation—represents a new vision for the 60-year-old organization, which treats tens of thousands of patients each year who suffer from brain injuries, strokes, and more.

“Ability is our code word for recovery, cure. The entire organization adopted that word with great passion and vigor,” Joanne says. “That promise of ability didn’t come from the guys in our office—it came from the eyes of our patients. They want more. If we don’t get resources, that would be shameful. It’s not only money—it’s the right people, the right legislative support.”

Joanne has hired a branding team from San Francisco who plans to reposition RIC in this category of medicine on the world stage. Never before has the hospital needed to advertise or to pitch articles, but its new look calls for different measures.

The seventh of nine children, Joanne was born in Detroit. She earned a bachelor of science degree from Oakland University in Rochester, Michigan before heading to Michigan State. After completing her residency at Northwestern University’s Feinberg School of Medicine, she became a practicing physician at RIC in the early 1990s.

Joanne came aboard as temporary CEO when RIC experienced financial troubles in 2006. After a national search, it was suggested Joanne—who earned a master’s degree in business administration from the University of Chicago in 2000—stay permanently.

“Financial is not what I thought I’d be doing, but in reality, my purpose in training at RIC was to build a new foundation and a new future,” she says. “I knew what the mission was.”

According to the Chicago Tribune, RIC suffered a $16 million loss in 2006. By the next year, after new senior management was recruited and expenses were cut, it showed a small operating gain.

After taking the reins as CEO, Joanne tried to continue serving as a doctor but found it too challenging. Still, she’s as busy as can be working during the day, raising funds for the new facility at night and driving around her two children, horse-loving Claire and hockey-loving Michael.

She calls husband Rory Repicky “the secret of my success,” along with “a great nanny” and the ability to be organized. (“If you get organized, you can juggle a lot.”)

And no matter how busy she is on administrative tasks at work, she always finds time to visit patients.

“Even if they can’t speak, they are communicating what they want. So many times it’s in their look, their effort, their soul,” Joanne says. “The long-term relationships you have with patients in our field is great.”