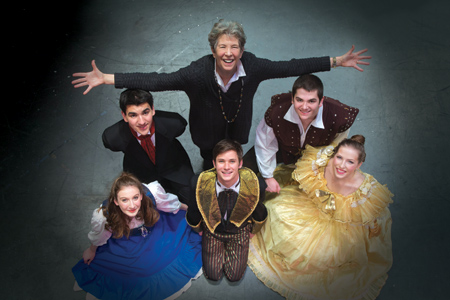 For someone who will be directing her 65th and final production on March 13 at Hinsdale Central High School, with a first-ever double cast for some of the lead roles, Christine Hicks seems extremely calm. Could it the wisdom she’s gained since joining Hinsdale Central’s staff in 1976? Or the front row seat she’s had watching students evolve into amazing individuals? Maybe a little of both. “It’s great to be a part of somebody moving forward in their life,” Christine says.

Looking back on her accomplishments, Christine is very proud of what she has been able to do in her tenure at Hinsdale Central, including building the drama program to what it is today, teaching Advanced Placement English and English 2 Honors for the last several years, and developing a creative writing class. She beams when talking about having students published in The National Council of Teachers of English and The Illinois Association of Teachers of English Bulletins. “I’m really proud that I helped those kids become more skilled writers,” she adds.

But it’s her time with the students on stage that Christine will be most remembered for. This March, Hinsdale Central will present Beauty and the Beast. Never before in the school’s history have the lead roles been double cast. “We just had so much talent this year—one wouldn’t have been enough,” Christine says. “At auditions, some of the female singers and actresses were just so strong, and we couldn’t see saying to them, ‘Sorry, you’ll be in the chorus for your senior year.’ Their talent guided us to this decision.”

One may wonder how Christine mentally prepares herself for the challenge of directing multiple productions during the academic year. “There are peak times [when it gets really busy]. But the parent organization for the musicals are a fantastic help,” says Christine.

Another added element this year is the Saturday matinee and the Royal Reception that will immediately follow. The Royal Reception will allow audience members to tour the stage and see the sets up close. They will have the opportunity to have their photos taken with performers in costume, get their programs autographed, and enjoy cookies and refreshments in the school cafeteria. Each child will also receive a special program, crayons, a Beauty and the Beast-themed tattoo, and a glow bracelet. Young children attending this performance are invited to wear their own princess, prince, or favorite character costume if they wish.

“The reception will be a wonderful opportunity for the community to come together. It adds a family component to the show. It’s also a great way for me to thank Hinsdale.”

Even after admitting that these massive productions are a lot of work, Christine says that she enjoys them immensely. “I look forward to them. They’re an extension of who I am and of my relationship with the kids.”

When probed about her feelings on retirement, Christine is pensive for a moment. “I can’t picture myself not hanging out in the auditorium.” But rest assured, she has big plans waiting for her after the school year ends. “I don’t want to be in charge of anything,” she laughs. “I want someone to tell me what to do and I’ll just do it.” She also plans to visit her daughter in South Carolina and learn how to cook.

As she begins this next chapter in her life, Christine offers some final advice to her students. “Do what you love.” Christine’s words, like her musicals, will no doubt resonate throughout the halls of Hinsdale Central for years to come.