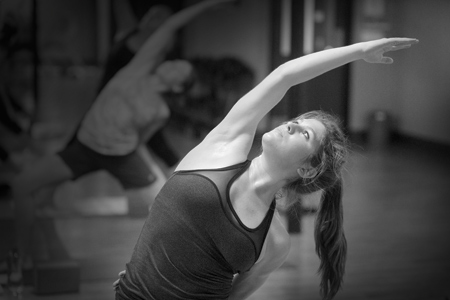 Yoga is supposed to be languid and relaxing, right? Well, add power to your yoga, and it can actually be quite the opposite. By increasing repetitions and speed, power yoga will easily have you working up a good sweat. With its popularity increasing across the nation, two area studios are at the forefront of this energetic style of yoga.

CorePower Yoga Hinsdale offers power yoga, among other yoga programs. Studio Manager Cassandra Choronzy has been practicing yoga for 10 years. At one point, she even used to clean a studio in the city in exchange for free classes. What drew her in was the feeling of calmness and stillness—a feeling she could never achieve biking or running. The practice allowed her to gain strength, while at the same time lengthen her muscles. Power yoga is not the hardest yoga out there, says Cassandra, nor does one have to be at a certain fitness level to try it out.

“There is no style of yoga that is better than another,” she says, adding that choosing a style depends on personality and fitness goals. “They are all the same in the sense that they use posture and breath.”

Power yoga, however, is a cardiovascular exercise that strengthens the heart and lungs. The increased heart rate, which may not be achieved in all forms of yoga, in turn, could allow for weight loss.

Cassandra describes power yoga through the yoga pose chaturanga—essentially, a high to low plank, or a yoga push-up with your triceps in close. The challenging pose strengthens the arms and the wrists and tightens the abdominal muscles, and it would not be recommended for individuals with wrist injuries. Throughout the quicker paced yoga class, you go from posture to posture through your breaths and use a chaturanga in transitions. Cassandra says she might do this 25 times in a class.

“You do gain flexibility, but the main focus is to build strength in the body,” says Cassandra.

Balvinder “Ballu” Singh, group exercise director at Five Seasons Family Sports Club in Burr Ridge, has been doing yoga poses, called sanas, since elementary school in his native India. He went on to compete in yoga competitions on the school team and earned a master’s degree in physical education with a specialization in yoga. For him, yoga is a way of life.

“Yoga is the union of yourself—body, mind, and soul,” says Ballu.

Hatha, Vinyasa, Bikram, and Tibetan are yoga forms that focus on different things. This can be improved flexibility, alignment of the body, increased lung capacity, or the strengthening of different muscles. Power yoga, Ballu says, is unique in that you are combining everything: poses, strengthening muscles while balancing, increasing concentration, and increasing stamina through many repetitions. Ballu personally enjoys power yoga because of the balance of an intense workout yet an increased concentration on the poses. One must exhibit power and force while simultaneously keeping a calmness.

“You are in another planet when you are in the class,” he continues. “When you combine power yoga with the music—and you have to be very careful in choosing the music—it is like you’re in the heavens.”