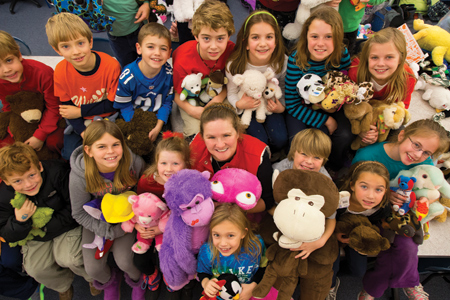 Katie Schwarz of Clarendon Hills wanted more than what the Girl Scouts had to offer. As a troop leader, she was tired of tiptoeing around the red tape and paperwork to accomplish what she wanted: a focus on selfless giving and community service run by the kids with little parental oversight.

“I wanted my kids to do good for the sake of doing good, and not because they would earn a patch or even get a thank you,” says Katie, mother of Maggie, Molly, Gavin, Connor, and Bridget. Instead, she came up with an idea.

GIVING stands for Girls and boys Initiating Volunteerism In our Neighborhood and throughout the Globe. In 2008, Katie launched the group at District 181’s Walker School, “one of the small schools with the biggest heart,” she says. It is her children’s school. After the school got on board, she and several other moms went into brainstorming mode to determine the parameters of the program. In the last few years, Vivian Hessel has joined in chairing the GIVING committee.

Katie wanted something that went beyond parents signing a check for fundraisers or donation drives—that’s not the kids themselves giving back. What they can give, she thought, is their time and talents. She narrowed down the goals to this: what can be accomplished in one hour (so that kids see the end result), at no cost to them, and that the kids can do themselves. It began with The Big Dig.

When Walker first opened, the landscaping was naturally pretty bare. GIVING’s first mission was to plant hundreds of spring bulbs in the fall. Every year since, a new section of the school is planted with daisies, tulips, and other flowers.

The group meets at school on a monthly basis—sometimes more frequently—and dedicates its time to completing a volunteer activity at each meeting. Some activities are on a consistent schedule: Halloween is “Treats for Troops” with hundreds of pounds of candy donated to soldiers. A stuffed animal drive takes place during the holidays, and a book collection follows shortly thereafter. The kids donate directly from their closets and bookshelves, and then count, sort, and box up the items.

“For my kids, it’s been easy to part with their ‘treasures’ and give it to a new owner,” Katie says of the impact of giving. “When they give, they are so excited about it and they want to do more.”

The group occasionally takes its work off-site, like Feed My Starving Children in Aurora. It also plays BINGO with residents of The Birches assisted-living community, and has made cards, vases, and flowers for its residents.

The kids have also mastered the art of crafting kits. Hospital “Busy Bags,” containing DVDs, toys, and handmade heart-shaped fleece pillows, have benefited the Adventist Hinsdale Hospital Pediatric Unit.
“Birthdays in a Box” ensure that kids who are clients of the People’s Resource Center Food Pantry and Sharing Connections can celebrate a traditional birthday party. The boxes include goodie bags, cake mix, frosting, candles, a tablecloth, and a birthday banner.

And when the Walker kids needed money, they did not turn to their parents’ checkbooks. Instead, they held a bake-off: the kids took Oreos, dipped them into fondue chocolate, and finished with sprinkles. They were then sold at Winter Family Night.

“(We) parents are used to doing things for the kids, but the kids are able to do it and willing to do it if we just allow them the opportunity,” Katie continues.

Katie has seen transformations in even the shyest of students involved with the program. When she sees them in the school halls, they jump up and down, anxiously anticipating the next good deed. She laughs that she pledged herself to the committee “until my youngest is in fifth grade,” but hopes that the group lasts longer than that and leaves a lasting impact in the community.

“I hope [GIVING] continues to flourish,” she says. “You need to learn that you are so lucky and that you need to give back.”