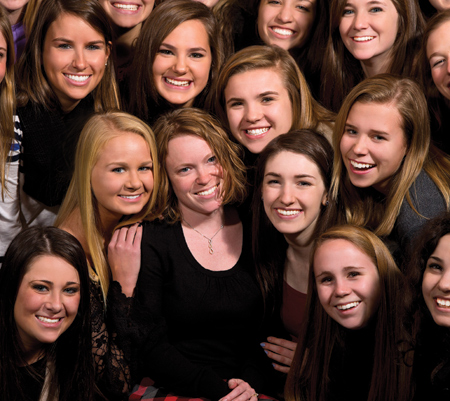 Kristen Bronke wants to make sure the girls she leads on the Hinsdale Central High School Cheerleading teams are not just able to do cheer moves, but can maneuver their way through life as well.

Kristen has been coach of the HCHS cheer squads for 10 years now and shows no signs of stepping aside anytime soon. She loves having a positive impact in the girls’ lives.

“It is really important as a coach to develop character in the girls,” Kristen says. “I do not want to work just on their skills as a cheerleader, but skills they will use in college and in life.”

“Students stop in my office on a regular basis to say, ‘Hi,’ and to ask about their grades,” Kristen says. “We look at their academics and how they can move forward after high school.”

Cheerleaders—and other students— appreciate her efforts.

A recent surprise party in Kristen’s honor brought current and former cheerleaders, as well as parents, out to pay tribute to the coach’s 10-year anniversary at the high school.

“Not only is Bronke an outstanding role model to all of the girls who walk the halls in the red and white uniforms, but to every single student at HCHS,” says Tori Capraro, a junior and two-year member of the varsity cheer squad.

Michelle Vranicar, who has had two daughters—one currently at HCHS, the other now at Vanderbilt University—go through the cheer program under Kristen’s tutelage.

“I feel very fortunate that my girls have been involved with such an outstanding person,” Michelle says.