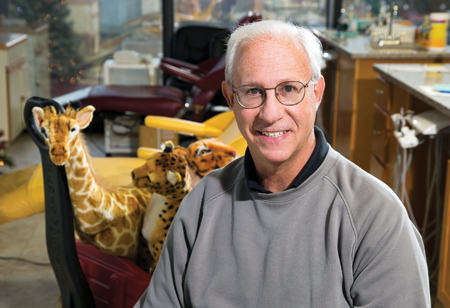 Rarely does “improve my child’s dental health” roll off the tongue when New Year’s resolutions are being uttered. But a vigorous dental health regimen is vitally important for youths. Hinsdale Living writer Angelika Labno got some expert advice from pediatric dentist John Nathan, a renowned local practitioner, educator, researcher, and a diplomate of the American Board of Pediatric Dentistry.

Hinsdale Living: I notice that nowadays so many children seem to be in braces at very young ages, 6 and 7. At what point do you seriously consider braces for a child?

Dr. John Nathan: This has become a controversial subject in our field because there are differing philosophies among practitioners as to when it becomes in the best interest of the child to commence orthodontic treatment. One school of thought prefers to wait until ages 10 to 12 or when almost all baby teeth have fallen out. Deferring treatment to this age may result in the need to remove permanent teeth where severe crowding exists. Another philosophy contends that it is important to never remove any teeth, baby or permanent, and to initiate early treatment as early as tolerated, frequently around age 6, by measures which include expanding dental arches. These practitioners prefer to try to create needed space and avoid extractions. This approach has the probable effect of extending treatment over multiple phases and commits to years in actual treatment. The majority of practitioners appear to fall somewhere in between these extremes, sometimes initiating treatment early when beneficial, sometimes taking teeth out, but trying not to unnecessarily prolong treatment and keep costs in line.

Timing really depends on several factors. These include: what the actual problem is and the feasibility of reducing or eliminating the problem early before it becomes a major problem, necessitating lengthy and complicated treatment when the child has lost all his or her baby teeth. The child’s maturation and ability to permit early intervention may influence early versus later correction.

The bottom line is early treatment, often referred to as the first phase, is of benefit to the child and parent in the sense that it reduces the need, or length, of second phase care? If yes, then starting treatment well before the loss of all or most primary teeth can be optimal. Early treatment, however, is usually beneficial for limited types of malocclusion and a small number of children.

Are kids of a certain age more prone to getting cavities?

Proneness to decay varies greatly among infants, children, and adolescents. For example, a family of five children, all with similar dietary and brushing habits, can show wide variation in decay experience. People differ! We can see some who rarely brush, have diets rich in sugar and decay-promoting foods, showing little or no decay ever! We refer to those individuals as “lucky.” Others, who maintain good brushing habits two or three times a day and watch their diets closely, still experience frequent decay. These “unlucky” children or adults must maintain even higher levels of oral hygiene, flossing, and proper use of fluoride.

Infants and toddlers can be particularly at risk for early and extensive decay if they receive a bottle or juice cup containing formulas or solutions rich in natural sugars or are breastfeeding where tooth brushing by the parent does not occur on a sufficiently frequent basis.

John E. Nathan, D.D.S., M.D.S., received his dental degree at Northwestern University in 1975 before completing a three-year pediatric specialty residency and master’s program at the University of Connecticut in 1979. He served as program director at University of Illinois Medical Center from 1979 to 86 while also serving as visiting assistant professor in the department of pediatrics at Rush University Medical College. He serves as attending house staff pediatric specialist at Lurie Children’s Hospital of Chicago and has been engaged in full-time private practice in pediatric dentistry in Oak Brook and Saint Charles since 1986. He is adjunct professor of pediatric dentistry at the University of Alabama and Case Western Reserve University, and clinical associate professor in the department of otolaryngology at the Northwestern University Feinberg School of Medicine.