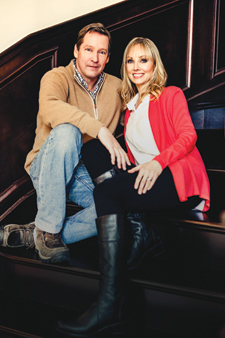 “I wanted to get out of Los Angeles for a long time,” says D.B. Sweeney. “I just don’t think it’s the best place for kids. The problem with L.A. is that everybody’s in show business or wants to be, and nobody’s happy with the spot they have. So, people tend to be a little squirrely. Not all of them, there’s a lot of great people there, but for us, that’s what it felt like. We just wanted our kids to have a more Midwestern kind of American experience.”

It’s the perfect sentiment coming from D.B., who has spent much of his career portraying a relatable everyman, tackling life with a charming smirk and a lot of sincerity. From his early work like Eight Men Out, Lonesome Dove, and The Cutting Edge to his many recent TV appearances on shows like 24, Castle, House M.D., and Two and a Half Men, D.B. has spent a lot of time on film sets. With his writing and directorial debut, Two Tickets to Paradise, he spent plenty of time running one. The story of three childhood friends who have grown out of their glory days was a film festival darling, winning awards at 11 festivals and earning D.B. three Best Director awards.

With his current move to our neck of the woods, he’s also signed on as the official voice of the Oprah Winfrey Network (OWN), heading down to Harpo studios three times a week to add narration to a variety of promos and shows. This isn’t his first time at the microphone though. He’s voiced animation like the movie Dinosaur and the Nickelodeon series The Legend of Korra. He also narrates the show Mountain Men on the History Channel and does promos for the NFL Network. When it comes to the duties as the official voice of OWN, though, it’s a whole new ballgame.

“Well, first thing in the morning I go out and I mow Oprah’s lawn,” says D.B. “In the winter, I get the snow blower out and make sure the driveway’s clear, because God forbid somebody slips. I put a little salt down—No, I’ve never even met her. I go down to Harpo about three times a week. They’ve got a great team down there.” 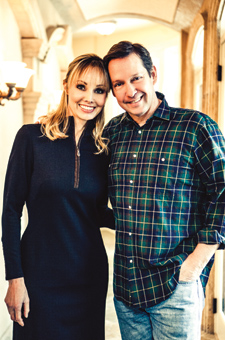 D.B., his wife Ashley, and their two children Cade and Cody arrived in Hinsdale three months ago after finally deciding it was time to make their move.

“All the signs were pointing to Hinsdale,” says Ashley. “He wanted to do a play either in New York or Chicago. I was like, ‘You’ve done the play thing in New York, let’s try Chicago.’ And I love Chicago. It’s a great city. The second I said that, we were here two weeks later.”

As soon as they arrived, it was clear they weren’t in L.A. anymore. Attending Hinsdale’s last Uniquely Thursday this past summer, they were taken aback by everyone’s friendly demeanor.

“People say hello here,” says D.B. “Everybody was coming up to us being all nice. Our neighbors own Aurelio’s Pizza in La Grange. They came over the second day that we were here—the Barnard family, great people—they knocked on the door and said, ‘You’re probably unpacking boxes and stuff, so we brought you some pizzas so you don’t have to worry about dinner tonight.’ Great pizza too. We go to Aurelio’s all the time.”

Our proximity to Great Lakes Naval Base has also allowed D.B. to keep up with another cause close to his heart. Letters From Hollywood is an organization he started to give all sorts of entertainers a platform to reach out and thank the men and women of the armed forces for their service. He’s collected letters from a variety of actors, musicians, and athletes expressing their gratitude for a job well done.

So many people have been adversely affected by a generation of Oliver Stone-type depictions of our military,” says D.B. “I think they lose sight of the fact that we have so many good people who put on the uniform out of patriotism and idealism. For every Sean Penn and Matt Damon making a fool of themselves at a microphone, there’s a whole bunch of people who are more supportive of what our troops are up against. I just don’t think we can say enough to support them.”

He headed over to Great Lakes Navy Base to say thanks in person, screening a copy of his new family-friendly, high school football movie Underdogs before answering questions and taking pictures with people. The letters of support he’s collected are all on display at lettersfromhollywood.army.mil.

Though they’ve only been here a short time, it seems like D.B. and Ashley are settling nicely into the Midwestern way of life. They’re exploring the wide variety of fantastic restaurants and their kids have hit the ground running too. Cade is keeping busy playing hockey and Cody has taken up horseback riding.

“It’s a great credit to Ashley that she was game to try it,” adds D.B. “To just pick up your life and go, that takes a special kind of woman. I’m glad I got her.”