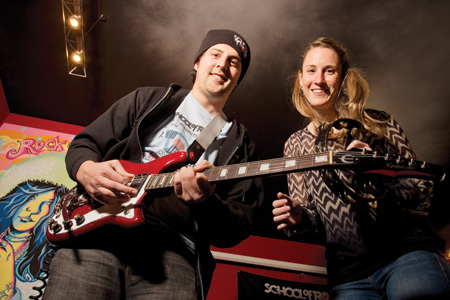 An amplifier and other music equipment sit on the pool table in Hugh Parson’s Hinsdale basement. The ping-pong table that had been part of the basement set-up has been folded up and moved into the storage room, replaced by a drum set and microphone stands.

What was once his kids’ recreation space has now become Hugh’s play area – the site where his band Hugh Too conducts its practices.  Hugh, an executive with BP, is the organizer of the group of executives and professionals who play in the classic rock band that has gigs at Dell Rhea’s Chicken Basket in Willowbrook and other local establishments.

Even though Hugh’s basement is set up for rehearsals, practices are often far and few between for the six band members.

“We need to do our calendar three months ahead of time,” laughs band member and fellow Hinsdale resident Tom Manley, who also is a certified executive chef who has cooked for three presidents.

Hugh says the band got started when he and some neighbors got talking about music.  Most of the band members are in their mid 50s.

“We are not doing this for a living. We all have jobs,” Hugh says. “And we are at the point where if we need some equipment for the band we can go out and buy it.”

Having a strong following makes the band popular with local bars because the places are packed on performance nights. Hinsdale resident Paul Tyler, who handles vocals and plays the mandolin and percussion for the band, says they are all into music for the right reason.

“We are doing it because we love it,” Tyler said. “There are no drugs. There is no philandering.”

Manley says music is just an extension of band members’ involvement in their towns. “We are like an old pair of jeans stitched into the fabric of the community,” Manley states.

More local residents like the members of Hugh Too (which ironically plays no U2 despite its name being a takeoff of the Irish rock band) are getting back into music once their kids are grown.  Enough interest has been shown for individuals looking to get back into performing or adults with the unfulfilled desire for a guitar solo that the local School of Rock facility will be starting an adult program.

Interest from parents with kids already at Hinsdale’s School of Rock got the ball rolling on the program for adults. Old Skool will start Jan. 6 for adults 21 years of age and older. The program includes a weekly 45-minute private lesson and a weekly 90-minute band rehearsal. The rehearsals culminate with a public concert at an entertainment venue after about four months. Cost for the program is $275 per month.

“When we started talking about Old Skool, parents were like ‘I couldn’t possibly.’ Then they were like, ‘If you did have it, what day would it be on?’” smiles Anne Dills, owner of the Hinsdale School of Rock.

Anne, who began playing guitar at age 13, says she hears from moms that they may be the kid transporter to every other event, but the dads somehow find time to take the kids to School of Rock lessons.

An Old Skool program has already started at School of Rock’s Naperville facility and has 16 members. It also has a 21 and over rule, but the majority of clients are from 30-45 years of age.

Patrick McKenna, general manager of the Hinsdale School of Rock, says the school’s system gets kids and adults playing music quickly instead of spending months of simply learning chords. Getting that taste of playing generates more interest with students and keeps them involved more than other systems, he says.

“I would rather keep someone’s interest and have them enjoy playing for years,” McKenna says.

Chris Catalano, chief executive officer of School of Rock since 2010, practices what the company preaches. He has been part of the band Paparockzzi for about six years. The band regularly appears at Hinsdale’s Uniquely Thursdays summer concerts and performs at parties, country clubs and local events.

The Hinsdale resident said he had always had a love of music. “In the ’70s, I fell in love with the piano,” Catalano says. “I was in a house that had a piano and was drawn to it. I started lessons and I hated it. I told my dad I wanted a drum set. He said, ‘No frickin’ way,’ but that year there was a guitar under the tree.”

After playing in bands in high school and college, Catalano gave up playing music when he entered the business world and a family soon entered the picture. He said getting back to playing has been a thrill.

“There is something special about being on stage, to watch people dance in front of you,” Catalano said. “There are a lot of egos in music, but at the end of the day, you have made something wonderful. That is why School of Rock has been so successful.”

Burr Ridge resident Scott Magnesen is a managing director with Morgan Stanley. He also can be seen playing the drums at area events with the cover band Wanderlust.

“Music is my thing. I will probably do it for the rest of my life,” Magnesen says.

Having a stage in his basement, Magnesen said Wanderlust met religiously at his house from 1-5 p.m. every Saturday when they were working on creating a CD.

“Now, we are doing pretty good if we can practice together once a month,” he says.

His group does a lot of 50th and 60th birthday parties. “We are like the ‘Forrest Gump’ soundtrack. We bring back a lot of old memories.”

Mark Biondi is senior vice president of operations for School of Rock, which has its headquarters in Burr Ridge. He has played drums with such artists as Slash and Tom Morello, listed as one of the top 25 guitar players by Rolling Stone magazine. He was touring and doing 250 shows a year. The School of Rock gave him the opportunity to stay in music but not be on the road all year.

He said he sees the excitement that parents have when they get involved with the program and begin to learn a musical instrument.

“I do see a lot of dads and moms who say, ‘I am thinking about giving this a shot,’” Biondi says. “A lot of people are not looking at it as a way to make a living but want to get back into playing music. We give them the opportunity to make music. That is where the magic is. To play a Beatles or Rolling Stones song is a lot better than learning the scale.”