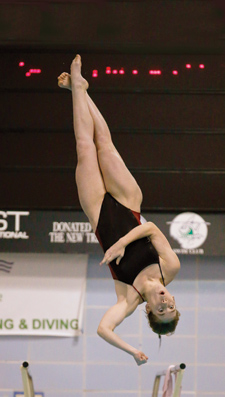 “I was an Irish dancer for maybe a week,” says Margy, a Hinsdale Central High School junior. “An instructor told me I have fantastic feet. But the instructor also told me, ‘You can’t keep your upper body still.’”

That is not a good thing. It is akin to a football coach telling a quarterback wannabe, “You can’t pass.”

But the 5-foot-3 Margy later found her extracurricular niche, and she hasn’t been able to sit still since then.

“I fell in love with diving,” she says.

Margy finished fourth in diving (one-meter) at the Illinois High School Association (IHSA) state swimming and diving meet in 2012. She took fifth at the same meet this past fall.

In between, at last summer’s AAU Nationals in San Antonio, Margy captured the three-meter championship in her age group (16s). First place was the last thing on her mind before the start of the competition.

“I wasn’t going for it,” recalls the two-time IHSA sectional champion. “I remember seeing a diver down there and thinking, ‘I could never beat her. There’s no way. I’m not going to win.’ As soon as I thought that, I made up my mind to have fun and take a stress-free approach.”

Height also helped the fun-loving Red Devil in Texas. The higher the board, the better.

There’s more time to showcase her talent, too. And sheer fearlessness.

One of Margy’s Glenbrook Aquatics club teammates, Katie Rourke, has always been impressed with Margy’s courage off the boards.

“What separates her most from other divers is her willingness to try anything,” says Katie, a junior at Loyola Academy in Wilmette. “She is the biggest daredevil I know. She’s open to trying new things. She’s determined to get better.”

Margy’s toughest one-meter plunge is a back somersault with 2½ twists. The dive’s degree of difficulty is 2.7.

“You have to be patient and keep it tight,” Hinsdale Central Diving Coach Steve Miller says of the keys to nailing such a challenging dive. “You also have to know where you are while you’re in the air.

“[Margy],” he adds, “has a lot of talent and physical power. She has the ability to ride the board well.”

Off the boards—be it poolside, in HCHS hallways, in another country while watching her sisters dance up a storm at a world competition—Margy drips effervescence.

She is off-the-charts brilliant in any kind of setting, capable of making someone’s frown disappear in no time. It’s not magic.

She is Margy, smile maker.

“Margy is so outgoing, so friendly, so much fun to be around,” Katie says. “At practice, in between dives, she’s talkative and funny. She is also eager to give diving advice to anybody.

“But when she’s on a board, getting ready to dive, she’s totally different,” Katie adds. “She’s in a different world, in a zone, totally absorbed.”

Margy once skipped practice the day before a big meet. It puzzled Glenbrook Aquatics Diving Coach Tony Santucci. She then won the big meet.

At another meet, one of Margy’s sisters pointed out that Margy’s toes were not as pointed as they should have been during a dive.

But it might have been nothing more than a playful critique.

Margy, after all, had made a similar observation about form to her sisters after a dance competition. Pointed toes are essential in Irish dancing, too.

“I love it when I get to see my sisters perform,” Margy says. “I’ve been to Scotland to watch them, Ireland…everywhere. They are fabulous.”