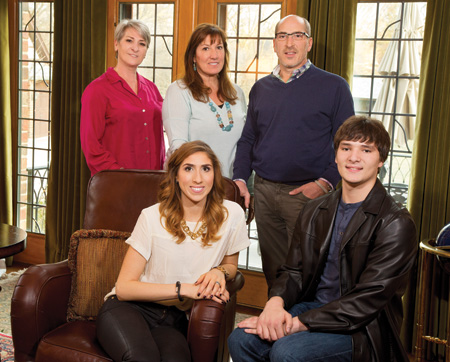 Siblings Bob and Suzanne Zaccone did not always agree on decisions regarding the family’s multidimensional printing business, but now in retirement, they are on the same page when it comes to the family’s philanthropic endeavors.

The Hinsdale brother and sister, along with Shere, their sister in New Jersey, oversee the Zaccone Family Foundation, which has already provided $750,000 to three charities in just six years of existence.

“When Bob and I were ready to retire, we decided we wanted to do some philanthropic work,” Suzanne says. “So, we started the Zaccone Family Foundation at the end of 2007.”

The Zaccone Family Foundation supports Mercy Home for Boys & Girls, Presence Saint Joseph Hospital, and the University of Chicago Cancer Research Foundation. Its support of Presence and the U of C Foundation stem from Suzanne’s time as a breast cancer patient, which began less than a month after the foundation was formed. Members of the foundation met with Father Scott Donahue and were struck by the impact his Mercy Home program had on youths with no place else to go. They subsequently backed the children’s charity.

While Bob and Suzanne lead the benevolent organization, there is plenty more family in the family’s foundation. Bob’s wife, Lisa, and Suzanne’s husband, Larry, are active in foundation work as are Shere’s four kids and Bob’s four kids.

One of Shere’s kids, Danny, even gives 10 percent of his birthday money and other monetary gains to the foundation. “It winds up being like 6 bucks, but it is great he does that,” Suzanne says.

“The kids are involved and they really help,” she adds.

A fund has already been established that will keep the Zaccone children getting together long after Bob and Suzanne are no longer involved with the foundation. The children will get together once a year to decide how the foundation funds will be directed for the next year.

“We don’t want the fund-raising to be diluted,” Bob says. “We want to have as much effect as possible.”

“We do a lot for all three,” Suzanne adds.

The foundation’s second annual fundraiser will be held March 1 at the Hyatt Lodge on the McDonald’s Campus in Oak Brook. The event will feature an auction for a NASCAR Racing Experience and other experience events that Bob categorized as “priceless.” The Zaccones hope to double the amount raised with this fundraiser, which will benefit Mercy Home.

It was decided that the funding recipient of the foundation’s annual gala will be rotated to have more impact for each individual organization.

It was being invited to a charity boxing event nine years ago that got Bob focused on Mercy Home. Going to the Mercy Home charity event, where stock brokers and other financial leaders take to the boxing ring after six months of training, Bob learned about the organization and its efforts.

“I liked Mercy’s cause,” Bob says. “I liked that it gets kids off the street and once part of Mercy each youth contributes.”

Supporting Presence and the U of C Cancer Research Foundation was “a no-brainer,” Suzanne says with everything she has been through in battling cancer. Mark Connolly, M.D., medical director of the Center for Cancer Care at Presence, put Suzanne at ease when she was investigating which doctor should be the choice for her cancer treatment.

The foundation has supported Dr. Connolly with state-of-the-art equipment. Its support of U of C includes microsurgical fellowships.

The March event at the Hyatt Lodge in Oak Brook will pay tribute to Father Scott Donahue and the work he has done on behalf of young men and women. Father Scott shares, “I am inspired by the way that Suzanne has made helping our young men and women a personal mission. She continues to find new ways to help and encourage the young men and women who are entrusted to our care and introduces countless new friends to us who bring them even more opportunity and support. Suzanne is truly a hero for our children, and I am grateful to God for her friendship and for the support of the Zaccone Family Foundation.”