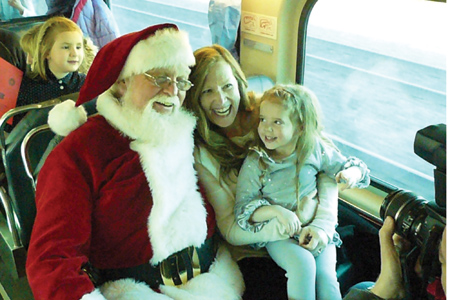 That is because Clarendon Hills got the first letter from Warner Bros., creator of the 2004 “Polar Express” film, and Rail Events, Inc., which conducts railroad special events management. Hinsdale got the second.

The first letter, sent earlier in the fall, said that “Polar Express” trains could not be run without Warner Bros. and Rail Events’ permission. The second letter, that came later in the fall, had a little more of the holiday spirit. It said that because many agencies already had “Polar Express” plans in the works – tickets, program listings, etc. – they could keep the name without a license for one more year.

“The Clarendon Hills Park District was not interested in pursuing a license,” Kelly Smith, the agency’s superintendent of recreation, said of actions taken based on the first letter. “It is the same event. We are just not referring to it as ‘Polar Express’ and we will not read that book.”

She said kids are often so keyed up for the event and Santa that they hardly pay attention to what story is being read to them anyway. So losing the “Polar Express” book is not that big of deal, she noted.

The Clarendon Hills event, which has been around since 1997, was named the “Santa Train” for December’s event. Smith said the one-train event could be changed to “Holiday Train” or another name going forward. Even going back to “Polar Express” is not off the table and will be decided by Park District officials down the road.

“We will see how we want to move forward,” Kelly said. “We do not want to close the door totally on ‘Polar Express’ just yet.”

“There is a license cost and we are not a money-making business,” Gina said. “We offer a full buffet and activities. If we incur additional costs, we will likely need to pass them along to our residents.

“We are leaning toward renaming it because of the licensing.”

Hinsdale’s event, which includes showing the movie and providing a meal, runs around $40 per ticket. The village’s “Polar Express” provides two trips—each with up to 135 people. Gina said some in town have said Hinsdale had the first “Polar Express” event 20 years ago, with the train ride being based on the book, not the movie.