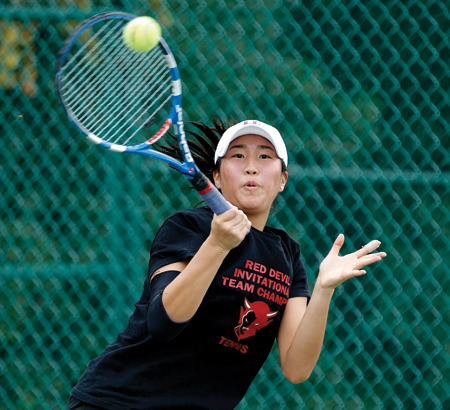 With her rackets nearby and a textbook in her hands, Hinsdale Central High School Senior Tennis Captain Katie Lee was the picture of the classic student-athlete, chipping away at a load of homework while en route to a meet on the team bus.

But an unusual air show—conducted by some of her teens-will-be-teens teammates—briefly disrupted half of the Red Devils’ No. 1 doubles pair.

Grapes flew slightly above her head.

“They were trying to throw them out a window,” Katie recalls.

She neither swatted the grapes with a racket nor chose to participate in the activity. She had serious work to do.

The fruits of Katie’s labor, on and off the court: academic excellence and another significant role on a perennial power in girls tennis. Katie and her No. 2 doubles partner, Tiffany Chen (HCHS, ’13), helped Hinsdale Central take runner-up honors at the state meet last fall. Red Devils Tennis Coach Robin Kramer paired Katie with junior Rugile Valiunaite this season, and the duo had lost only two matches before the start of last month’s West Suburban Conference Silver meet.

“Katie has a lot of variety in her game, hitting all of her shots at a high level,” Robin says of the Oak Brook resident. “She can slice, hit penetrating shots, volley well, and put away shots after strong serves from her partner.”

Katie and Rugile staged an impressive comeback against a New Trier High School tandem at last month’s Lake Forest High School Power Quad, rallying from 5-0 and 6-1 deficits in a super tiebreaker played in lieu of a third set.

Katie and Rugile secured the victory with a 10-8 decision.

“They won because of their style of play after falling behind,” Robin says. “They went into a mode of complete aggression; they took it to them. And Katie did a good job of poaching and taking chances at the right times.”

Ranked a three-star recruit by Tennis Recruiting Network, Katie took her first lesson at the age of 5, but didn’t start playing in sanctioned tournaments until the seventh grade.

Katie is also the executive editor for Devils’ Advocate, Hinsdale Central’s news site. As a writer for the site in the 2012–13 school year, she crafted pieces about online gym, the school’s softball team, the administration’s changes in tardy policy, and students’ involvement in political campaigns, among other topics.

The daughter of Dr. John Lee, an orthopedic surgeon, and Dr. Sandy Kwak, a radiologist, Katie intends to seek a career as a dermatologist. Her mother suggested the path back when Katie was a second grader.

“The more I thought about, the more I thought, ‘Yes, that would be a good field for me,’” Katie says. “[Years later], I remember hearing someone say, ‘Dr. Kathryn Lee’; that sounded so professional.”

Several other members of her family opted to work in the medical field, including a grandmother who became a pharmacist.

“It’s a competitive field, I know,” Katie says of dermatology. “But the thought of seeing young people with acne and helping them overcome self-esteem issues is appealing to me. I can’t see myself doing anything outside a medical field.”

Among the doubles entrants in last year’s Lyons Sectional field was Nazareth Academy’s Alysa Straub and Alexia Petrovic, the reigning state doubles runners-up at the time. Katie and Tiffany faced the pair in a semifinal and notched an impressive 7-6, 7-6 victory after falling behind 3-0 in the first set. The state meet seeding committee then rewarded Katie and Tiffany with the No. 2 doubles seed.

“What a match that was,” Robin recalls. “They worked so hard during that match, which was intense from start to finish. To see their big smiles after winning—that was such a great moment. Katie took a liking to doubles right away; she enjoys the strategies involved. Singles can be a grind. Doubles, though, is more like a chess match, and that suits Katie well.”

Off the court, she finds comfort at church and during youth group get-togethers. It’s always “ad-in” for Katie on Sundays.

“There’s never pressure at church,” she says. “I’ve been going since I was 2, and I love it there. When I hear a lesson at church, it’s not just a lesson; it’s also a way to live your life.”