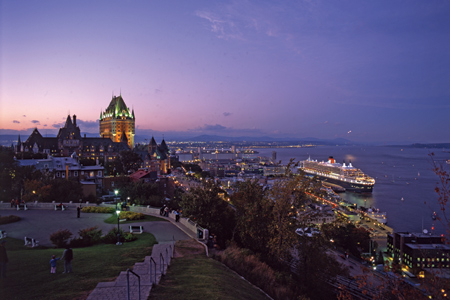 Oh, Canada! It’s probably not a stretch to suggest that many of us don’t know our northern neighbor terribly well. After all, it’s one big country and Halifax is as unlike Vancouver as New York is from Los Angeles. Thanks to its easy access and self-effacing reputation, we might even be guilty of considering Canada as an amiable annex of the USA. But check out Québec and you’ll think otherwise. Visiting the province is like visiting Miami. Chances are, English won’t be the first language you hear. And, although Montréal, in particular, is almost universally bilingual, it’s hearing a different tongue that gives a stay here that unmistakable sense of being “elsewhere” (and just a couple air hours northeast of Chicago, to boot).

While a citizen of Montréal may dismiss Québec City as a burg, and the Quebec resident is not above characterizing Montréal as just “a big American city,” Midwesterners will find each town offers its own distinctive charms. Situated on an island where the waters of the St. Lawrence and the Ottawa Rivers converge, Montréal is Canada’s largest city after Toronto, an economic and cultural hub. Downtown, Rue Sainte-Catherine, with its mix of retail and offices, reminds one of State Street in the old days. Sherbooke Street, once a grand residential thoroughfare, is now home to banks, hotels, and corporate workplaces, as well as the Montreal Museum of Fine Arts, where the collection ranges from antiquities to the cutting edge (its Jean Arp bronze, Small Venus of Meudon, looks like a Brancusi Bird in Space that has swallowed something very large). Cross Boulevard Saint-Laurent, the eastern boundary of the boutique and café-rich Mile End district, and you’ll encounter Fous Desserts (809 Avenue Laurier Est), a spotless little pâtisserie, quiet as a library on a late morning—the locals engrossed in their iPads and newspapers, I intent on my bowl of café au lait and pain au chocolat.

Eating, of course, is central to any trip, and there’s more to food here than poutine, that celebrated (and sometimes shunned) concoction of French fries, cheese curds, and gravy. From a proper bagel (not the spongy, super-sized version) at St-Viateur Bagel, to the progressive cookery of Chef Antonin Mousseau-Rivard at Le Contemporain in the Museum of Contemporary Art (Musée d’Art Contemporain), Montréal does not disappoint. Dining out, in fact, is one surefire way to immerse oneself in the essence of the city. And, for those whose arteries can take it, Martin Picard’s Au Pied de Cochon (536 Avenue Duluth Est) makes one feel as if Montréal were home. With its coffee shop décor, the place isn’t much to look at, but between the downright hedonistic menu (signature dishes include the PDC Melting Pot—pork belly, pork sausage, and blood sausage atop mashed potatoes so creamy they look like cake frosting), the manifest delight folks take tucking into their food, and the chaotic choreography of the open kitchen (grab a seat at the counter), the restaurant generates a wonderfully informal sense of occasion, a vibe that only a well-loved and truly authentic local establishment can provide. While the menu is heavy on pork and foie gras, chances are something lighter will make an appearance, such as buttery Gaspé shrimp (so tiny it seems a sin to consume them), served raw with a splash of soy sauce and maple syrup.

For the visitor seeking the charm of years past, Old Montréal, a low-rise, river-hugging district of 18th and 19th century buildings, casts a satisfying, time-traveling spell. Place Jacques-Cartier—closed to traffic in the summer when it comes alive with music and street performers—is home to several cafés with terraces that are perfect for lazing away an afternoon. Saunter down Rue Saint-Paul and discover an appealing array of art galleries, boutiques, and restaurants. If all the cobblestones and stone façades excite the historian in you, check out the Centre d’histoire de Montréal and the Château Ramezay to get a handle on the city’s past.

History is all around in Québec City. While the monumental, 120-year-old Château Frontenac is, arguably, the city’s most recognizable landmark, the hotel is a relative newcomer in this historic town, founded by Samuel de Champlain in 1608. From the picturesque Place Royale and the fortifications surrounding the old city, to Faubourg Saint-Jean—site of J.A. Moisan (the oldest grocery store in North America) and the graveyard of St. Matthew’s Protestant Church, where headstones date to 1772—Québec transports one at every turn. Shops abound, but you don’t have to be in a buying mood to appreciate the eye-appealing streets of the Quartier Petit Champlain, the byways radiating from Notre-Dame de Québec Basilica, or the Lincoln Parkish Grand Allée. And art lovers must pop into the Musée National des Beaux-Arts du Québec, whose holdings include an impressive representation of Jean-Paul Riopelle, one of Québec’s most renowned contemporary artists, and an astounding assembly of Inuit art.

Of course, even the most history-addicted traveler needs a good meal, and this utterly romantic city offers a bit of everything, from traditional Québécois cuisine at Aux Anciens Canadiens (34 Rue Saint-Louis) to flawless bistro fare at L’Echaude (73 Rue du Sault-au-Matelot). Foodies (Have we found another word yet?) ought to consider Panache in the Relais & Châteaux-rated, Auberge Saint-Antoine. This is the sort of place where carrot cake is an artful spread of crumbs highlighted with tiny cubes of carrot. Enjoy a perfect martini (made with Québec’s own Ungava Gin), while you peruse the menu. And take your time deciding between the locally-raised guinea fowl with cabbage, onion, and foie gras, or walleye with artichoke and squid, because this is one lovely room. Situated in a 19th century warehouse, its wide plank floors and stone walls punctuated with deep-set windows—combined with the glow of a fireplace and impeccable service—provide the dining equivalent of a great massage. Sit back, enjoy, then take a constitutional through the time-caressed streets. Chicago will feel very far away.